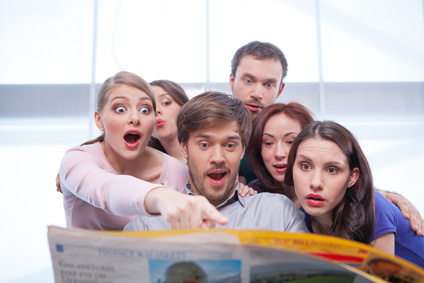 This past Sunday the Florida Times-Union‘s Editor Frank Denton, who writes a weekly Sunday column, fell all over himself apologizing that his paper: “…did not reflect the reality that it is Caitlyn Jenner — not the former Bruce Jenner — appearing on the cover of Vanity Fair…”

According to Mr. Denton the FTU initially reported: “Bruce Jenner poses as Caitlyn Jenner for Vanity Fair’s July cover.” Mr. Denton apologized for that saying, “…her transition is now complete” and then went on to add “…we as journalists are learning a new perspective and even a new language to describe a phenomenon important to our society…”

Personally, I don’t give a rip if former Olympic athlete and gold medal winner Bruce Jenner has decided to stop doing push-ups to concentrate on wearing push-up bras. I don’t care if a person is a lesbian, gay, transgendered or bisexual or what they do to each other in or out of that closet they are fleeing. However, it did occur to me that folks having trouble snagging a Friday or Saturday night date might want to explore the bi-sexual concept, as it would probably increase their chances of success by 50 percent.

Mr. Denton, and others in his editorial department, seem to think that a group of crybabies — blacks, illegal aliens, single unwed mothers, etc. — dwell 24 hours a day on a presumed bias personally directed at them, ignoring the reality that most of us are too busy trying to support ourselves and our families to even think about them, let alone concentrate on destroying their lives. The other part of this reality is that we are getting sick and tired of dealing with their constant whining, while simultaneously paying their bills. And now Editor Denton wants to add the LGTB group to that “entitled” crowd.

The left-wing crowd is defining the “new normal” and west coast blogger Burt Prelutsky nailed it recently when he said that social conservatives are being derided as being on the wrong side of history simply because polls indicate that a majority of young people favor government-funded abortions, same-sex marriages and legalized drugs. “All it really shows,” he said, ” is how many millions of parents have stood idly by while the left-wing schools and media have turned their impressionable young brains into mush, convincing the young louts that being empty headed and non-judgmental is synonymous with being broad-minded.”

I am very tired of sanctimonious gas bags like FTU Editor Denton telling me what I should or should not think about this. And frankly, Frank, I’m as sick and tired of seeing tabloid magazine photos and articles about Bruce-Caitlyn Jenner in the grocery store check-out line as I am seeing stories about his/her boorish no-talent family of dysfunctional Kardashians.

Is there a movement for dim people’s rights too Frank? If so, there’s a charge you’re certainly qualified to lead as you’ve got a boat load of them in your editorial department; our federal, state and local government is crammed with them; Hollywood is overflowing; and the universities are staffed with them. Have at it!

Or how about white, Christian males and Jews? Now there’s a couple of groups of people that it is open season on for the left, late-night comedians, the Democrat party, and frothing–at-the-mouth-do-gooders and hate-mongers. Where are their advocates Mr. Denton? Even government statistics bear out the fact that even since 9/11, there have been more acts of violence and vandalism directed at Jews than at Muslims in America and, no doubt, far more verbal assaults on Christians.

How can a newspaper that is rapidly losing subscribers and advertisers, get any more ridiculous? I pay more than $400 a year for a subscription to this blather. Good grief! I think it’s time to reconsider one of my news sources.

Will The City Commission Run Out Of Gass? Local attorney and perpetual thorn in the side of Fernandina Beach City Attorney Tammi Bach — Clinch Kavanaugh — has officially filed to run for the seat now held by Commissioner Pat Gass, and the voices in her head, who have publically stated that they represent the folks here who don’t vote and do not attend commission meetings. Mr. Kavanaugh, who will be Ms. Bach’s worst nightmare and who could make a very comfortable living just on law suits filed against the city, is an articulate and cantankerous character who certainly knows his way around city hall. The fact that he’s a seventh generation island native with many connections shouldn’t hurt his chances either. Mr. Kavanaugh and I don’t always agree on national issues, and his entry into the race will certainly make for a lively and colorful campaign. In most cases his nonpartisan local views are aligned with a strong local economy, a vibrant downtown, waterfront improvements, and more that I and many others do agree upon.

Heeeeere’s Johnny! I am sure that sometime in the not too distant future we’ll see Fernandina Beach City Commissioner and Palace Saloon bartender Johnny Miller show up at a commission session wearing a Che Guevara t-shirt and a beanie hat with a little propeller on top as it appears he has been sitting next to Commissioner Pat Gass too long and some of the more frenzied voices in her head have transferred hosts and are now in full control of the far left barkeep’s thought processes.

All of this “Miller Time” activity comes on the heels of his other priorities including backyard chicken farming, dogs dining on restaurant patios, horses pooping on the beach and plastic bag bans.

But here’s another way to look at Johnny’s bizarre compulsions. He actually offers the more reasoned voices on the commission a foolproof method for keeping Fernandina safe, economically sound, and environmentally clean: Just do the exact 180-degree opposite of whatever he proposes as quickly as possible.

The This Is Not News Department: The New York Times reported last week that Florida Senator Marco Rubio, who is running for the Republican presidential nomination, has received four traffic tickets and also relayed that his spending included an $80,000 boat and leasing a $50,000 car. Even liberal Jon Stewart, host of the “Daily Show”, tore into the paper asking: “How is this front page news? I can’t think of a single person who would be bothered by this.” He also tore into the paper’s description of one of Rubio’s homes: ” …an in-ground pool, a handsome brick driveway, meticulously manicured shrubs and oversized windows” prompting Stewart to respond in mock outrage: “Oversized windows! Oh, what’s the matter, senator? The normal amount of light isn’t good enough for you?” The Times’ Sheryl Gay Stolberg defended the paper’s coverage, saying running for president opens every aspect of your life to public scrutiny. I assume the paper is still compiling its material on Barack Obama and I am certain we can expect meticulous scrutiny of the Hillary Clinton campaign. Oh wait! Never mind.

Drinking, Dining & Dancing: The fun trio of Tara Hatton, Nora Ricci, and Janet Vining, have taken over the downtown 316 Centre Street’s Courtyard Pub and renamed it The Alley Cat Seafood, Beer House & Wine Boutique, which in addition to serving food, beer and wine also offers a unique schedule of music which still includes popular piano man John Springer every Thursday evening 6:30-10:00. Folks, this a very fun place with good food, reasonable drinks, and live music featured six days a week, and some days featuring two to three shows. The ACSBH&WB sources its musicians locally as well as from several different states. Upcoming acts include names many may recognize such as Don Miniard, Jim Geiger, and Michaele Alongi, while beginning in August Gitlo Lee, (Blues Man of the South) will be featured every Second Friday and two-time Grammy Nominee, Aaron Bing, will perform three “Jazz Night” shows in July. Every Monday is a Soul Rock dinner show with ACSBH&WG partner Ms. Ricci (voted Best Musician, Jacksonville, by City Xtra Magazine 2015) on guitar and keyboard. The ACSBH&WB  is open Sunday, Monday, Wednesday 11 am-Midnight; Thursday, Friday, and Saturday 11 am-2 am. with food served from opening until closing. In addition to a variety of craft beers and premium wines patrons can also select from an assortment of card and board games to entertain themselves. And if the food, booze, music and board games aren’t enough, there are more than 100 comic books available for adults and the kiddos. And, as they say on the late night infomercials: “WAIT. There’s More!” The joint has a package license, which means that if you’re heading out on one of Pajama Dave’s Booze Cruises, or  you’re on the way home  to a B&B or hotel room, or your girl or boy friend’s place, the gals can sell you beer and wine to-go. Soon they’ll be adding tobacco products, including a wide selection of cigars to puff on in the courtyard. From time-to-time the ladies will also host special events, such as a 4th of July Pub Crawl with their backyard neighbor Green Turtle and special movie nights. Tomorrow they celebrate the movie Jaws 40th anniversary with two free showings, one at 3 pm and another at 5:30. Look for them on Facebook and Google (type in their name but don’t be confused by the former Alley Cat Lounge on 14th St). They are working on a website —  AlleyCatFernandina.com — which will feature a menu and event calendar. Yesterday. regular Rob Taylor, a talented drummer and local high school biology teacher, accompanied Mr. Springer to the delight of an adoring crowd.  Call ’em at 904/491-1001. Steve Raszkin of A Taste of Wine by Steve, 4924 First Coast Highway,  features a contrast in wines with a Spanish Flaco priced at $6.50 and a Caymus Special Select Cabernet 1.5 Liters from Napa Valley for $329.95. Stop by tonight between 5 and 7 for the weekly tasting and Steve might let you taste the Flaco and may even let you look at the Cabernet. Call ’em at 904/557-1506. Did you know you can rent the Amelia Island Museum of History for events? Well, you can, and the glossy 100 plus page First Coast Magazine has booked the 233 South 3rd Street for an event Tuesday, June 30 from 6-8 pm that features talented local guitarist Dan Voll, cocktails by Marlin & Barrel Distillery, sweets from Nana Teresa’s Bake Shop and Southern eats courtesy of Gilbert’s Underground Kitchen and 29 South. Go to firtscoastmag.com/IslandCulture to buy $25 tickets or get ’em for $30 at the door the day of the event. The museum benefits by getting a cut of the proceeds and look for articles about the contributing suppliers in the next issue of the publication.

Well Dave, I don’t know how you do it. 3/4 of your blog denigrates Commissioner Miller. I remember when Johnny Miller was a favorite son to you. The nicest guy, and the best bartender on Amelia Island. But then again I remember what a great guy Charlie Corbett was to you. But friendships are fleeting things to you. My mom always told me “You like someone Because. You love someone regardless of.” But I have a feeling you take that Motto a step further. Johnny Miller has worked harder and contributed more to this Town and it’s people, than any other Commissioner. He and his wife Lori never stop, they are Invested and Involved. in this Community. You use these old friends to promote yourself and this blog. then throw them away. Beware, your running out of friends. Why don’t you use your talent in a positive way. This is really unbecoming and not humorous.

Dave….thanks for “waking me up!”. I completely lost track of how much I’m paying for the awful news in the Times Union. Called them today and cancelled!! There are better places at less money to stay informed properly. Keep up the good work!

You might take a look at these sites. Rayonier is growing us as mushrooms….