A handful of observers at the Thursday, May 1 Shrimp Festival Parade were whipped into an emotional frenzy by a lone entry walking the route, cracking a bull whip, saying the whip “cracker” was a symbol of slavery and its brutality.

Based on an article in the online Fernandina Observer, “Two parade marchers whip up controversy;” letters to the editor of the Fernandina Beach News-Leader; and Facebook comments, it appears that these parade watchers had been standing in the sun too long.

I saw the guy cracking the whip, and – along with folks around me – I thought he was entertaining and I didn’t hear a single complaint. On the contrary, he was applauded.

The comments made by the letter writers and those quoted in the Observer article are so outrageously loony, I could throw a deck of cards out the window and wait for someone to come by and pick up the three of diamonds and find a person with more reasoned thought, particularly those on Facebook who said “the man with the whips, raised the specters of the Ku Klux Klan and of Bull Connor, who turned fire hoses and dogs on civil rights workers in the 1960s.”

The absurd argument posed by these hysterical letter writers and Internet posters expose the poverty of their logic and tracks the impotent rage of a three-year-old throwing a temper tantrum. 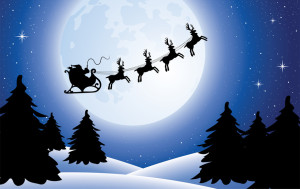 Based on their delusional comments dogs, firemen, fire trucks, bulls, Southern law enforcement officials, among others should all be banned from future parades as they are reminiscent of slavery and the Jim Crow era. And, by all means anything associated with a whip should never be allowed including jockeys, circus ring masters, lion tamers, ox-cart and mule-team wagon drivers, cattle drovers, Lash LaRue, Indiana Jones or even Santa Claus who is portrayed numerous times cracking a whip over his reindeer team (see illustration). Let’s also banish Miracle Whip, Cool Whip and whipped cream, subtle white racist symbols of Southern plantation life and slavery. And forget about displaying the Christian Cross, a symbol appropriated by the Ku Klux Klan.

Since it appears the Confederate battle flag also offends some parade watchers as well, let’s ban the Stars & Stripes too since slavery was legal under “Old Glory” for more than 70 years.

But, here’s a better idea. Let’s all sit back and enjoy the next parade that so many of our fellow citizens worked so hard to put together for us. I seriously doubt anyone involved in organizing the event or anyone entering it, had a racist thought or intended to offend anyone, just the opposite. I would also encourage Shrimp Festival Chairman Mark Deaton not to waste his time responding to these foolish people thus stemming their attempt to arouse and spread mythical anguish.

I also suggest that these offended observers save their moral rage for late slave-holder David Yulee, who built a cross-state railroad on the backs of black slaves and was imprisoned as a traitor to our country following the Civil War, and who a group of locals are honoring with a statue in front of downtown Fernandina’s restored train station. Now here’s a guy that they can direct their righteous indignation toward and actually have facts on their side. I bet Yulee owned a gun and a whip too.

Local Bakery Changes Hands: Almost three years to the day they opened The Great Harvest Bread Company on Sadler Road and hired Brandon Mitchell as a baker, Dirk and Jody Henson have sold their successful operation to Brandon and his dad Doug. Brandon is currently in Montana, the national HQ of Great Harvest, learning the corporate ropes and suffering through a freak snow storm, but is expected to be back shortly and regular customers won’t notice any difference in the tasty baked goods. Jody and Dirk will remain on the island with both going into business consulting operations, jobs they also did well before becoming bakers.

Historic Site Sale: According to an article in the Fernandina Observer the Standard Marine and Tringali properties at 101 N. Second Street and 105 North Front Street downtown were sold on May 6 for $2,000,000.  The purchasers are an investment group out of Atlanta, Georgia who will hold the property in the name of Front Street Properties, LLC and the paper says plans for the property are currently unknown but whatever it is will be an improvement over the historic site that’s been sitting empty for years.

So You Think Your Job Sucks: If you don’t like the job you have now just be thankful you’re not cutting down trees for Rayonier or Rock-Tenn or working for the Fernandina Beach News-Leader as lumberjack was ranked the worst job out of 200 occupations this year with newspaper reporter coming in 199th for the next crummiest, all this according to CareerCast.com, an Internet site that targets job opportunities by industry, function and location. Imagine what being a reporter covering the forestry industry must be like. The best jobs they say are mathematician; tenured university professor; statistician; actuary; audiologist; dental hygienist; software engineer; computer systems analyst; occupational therapist; and speech pathologist, none of which appeal to me, except maybe tenured professor, a position that is immune to firing, except possibly for mass murder and even that would probably get a union involved to advocate for the smug, pipe-sucking, tweed coat-wearing killer.

A Gubernatorial Mood Ring: Remember those mood rings we bought years ago that would change colors depending on our emotions? We now have a gubernatorial candidate that does the same thing. Charlie Crist, who, when he was our Republican governor, was anti-gay marriage; anti-Affordable Health Care Act; anti-abortion; anti-illegal immigrant; anti-Obama; and thought he was on the short list to be John McCain’s running mate. He is now for all those things except John McCain. If you don’t agree with what he says today, then wait until tomorrow. I’m not a huge Republican Governor Rick Scott fan, but I know exactly where he stands on the issues while I have no idea what a vote for Democratic candidate Crist means. Slip one of those rings on Crist’s finger and we’d be treated to an array of colors changing as fast as those on a brightly lit county fair midway.

“Music is like candy. You throw the rappers away.” – Anonymous.

Things To Think About: These thought provoking quotes popped off the page while reading through Georgia Public Policy Foundation material recently:

“American governance over the centuries has shifted from state’s rights to federal power.Now the states are evolving into little nations. State-nations … For example, Florida’s population is about to surpass New York’s. Georgia has 10 million people, or twice the number of Ireland’s, its ports would make several czars salivate, its three leading universities rank among the nation’s greatest, and its capital is a vast metropolis. Now these state-nations want some of their power back.” – Joe Ledlie, Atlanta-basedcommunications executive and former national journalist.

Grumpy Old Men: If Hollywood producers ever consider doing a remake of the film “Grumpy Old Men” they should consider auditioning locals Ron Sapp and Fernandina City Commissioner Charlie Corbett for the lead roles. I don’t know about their acting skills, but based on Mr. Sapp’s occasional commentaries in the local newspaper and Mr. Corbett’s gruff demeanor during city commission meetings, they’ve nailed the grumpy part.

Oui, The Salt Life Is Good: If you think your taxes here are high and may increase further and are thinking about moving where they are lower, scratch France off your list. (See above Michael Barone quote.) The French migration from their “progressively”leftist leaning country has been going on for years and so many French citizens now live in London now that it has become France’s “sixth largest city.” French newspaper Les Echos reported that some French were taxed more than 100 percent of their income so London will surely move up a few notches on that list with residents bailing out of France as fast as Californians trying to escape that state’s inevitable bankruptcy. We’re fortunate in Florida not to suffer a state income tax, and boast a business-friendly state government, other reasons besides sunshine and beaches for our continuing population increase. Oui, life is still very good at the beach.

Is This a Great Place to Live or What Department? Conde Nast Traveler readers voted Amelia Island the 24th top island destination in the world and one of the top 10 in the US last year, while Leisure Living magazine says that Fernandina Beach is the fifth best small town in America. It appears they’re on to something that those of us who live here have known for a long time.

Maybe You’ll Like Jail Food: If you post a negative online review of a business and were not actually a customer then you could be in big legal trouble as a Virginia court recently ruled that the website Yelp must turn over the names of seven reviewers who anonymously criticized a prominent local carpet cleaning business.The owner of the business said the users leaving bad reviews were not real customers of the cleaning service and he may have a lawsuit against them as his attorneys have issued a subpoena demanding their names. An appeals court agrees that the comments were not protected First Amendment opinions if the Yelp users were not customers and thus were making false claims says the Washington Times. As I’ve said before I don’t pay attention to online reviews from multiple sites including Tripadvisor, Urbanspoon, Yelp and others, that enable folks to anonymously review restaurants, hotels, bed & breakfasts, etc. If a friend, neighbor or acquaintance provides their opinion or a newspaper restaurant reviewer has been several times and provides a professional judgment that carries some weight with me. But an anonymous review? How do I know that that person isn’t the owner’s mother, girl friend, employee, worst enemy, competitor, etc.? Online reviews do not make the cut with me and a recent issue of Consumer Reports cautions readers to beware of reviewers who may be acting as paid shills to slam or praise establishments. I’ve read the online reviews of many of our island establishments and many are pure baloney even though that’s not what’s on the menu. Somebody needs to set up a site to review the reviewers and put the shoe on the other foot. And if you decide to post a spiteful review and haven’t actually been to the restaurant, the Virginia court verdict says you may end up dining on fried baloney, eggs and gravy in the local slammer.

Drinking, Dining & Dancing: Starting Saturday, May 17, and going forward every Thursday and Saturday Steve Raszkin of A Taste of Wine by Steve will be at Gourmet Gourmet from 5-6:30pm pouring some special selections at very approachable prices giving folks a chance to explore some new wines while enjoying a light bite from Gourmet Gourmet’s early bird or appetizer menus and meeting other local oenophiles. Cucina South, a new Italian restaurant started by Tim Seyda and John and Kelly May will have its grand opening Saturday, May 17 at 4828 First Coast Highway. Tim currently operates the popular First Coast Highway’s BarZin and worked with John when the two of them were employed at the Amelia Plantation.

Pete, if I recall properly, the guy who portrayed Lash LaRue in the films died about 20 years ago in a St. Petersburg, FL homeless mission. When I was a kid, he was my favorite Saturday afternoon western movie actor for two reasons: 1- the whip and 2- he didn’t sing.

DAVE,WE LIVE ON THE ISLAND 6MO A YEAR,AND THE OTHER 6 IN HAMPTON,VA..I LOVE FOLLOWING THE HAPPININGS IN FERNANDINA VIA YOUR BLOG..THANK YOU FOR THE EFFORT….LASH LaRUE .I THOUGHT I WAS THE ONLY ONE WHO REMEMBERED HIM….PETE