If you’re one of the many Northeast Florida residents that would like to take a ferry from Amelia Island’s Fernandina Beach downtown harbor to Cumberland Island and maybe even take your bike along, then take a minute to contact Gary Ingram of the National Parks Service at gary_ingram@nps.gov telling him you support the nautical route. 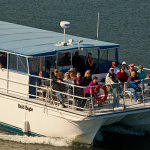 Currently Kevin McCarthy, who operates Amelia Island River Cruises & Charters out of Fernandina Harbor Marina, would like to do more than just show his boat passengers Cumberland Island’s wild horses, beaches, and historic landmarks then turn around and head back to Amelia Island.

McCarthy, who currently takes sight-seeing passengers back-and-forth on a daily basis, has indicated that he would be a bidder on a contract to service Cumberland Island with his boats that can transport up to 300 passengers daily. He is currently not allowed to moor at the Cumberland docks to let those passengers disembark because he has no contract.

McCarthy is being strongly supported in his efforts by Phil Scanlan, CEO of Friends of the Amelia Island Trail, Inc., as well as Fernandina City Commissioner Johnny Miller and a number of Northeast Florida residents.

According to the Jacksonville Times-Union’s online Jacksonville.com McCarthy said he and Friends of the Amelia Island Trail would like to see Fernandina get a ferry terminal to complete the East Coast Greenway bike trail that is a proposed 2,900 miles extension from Key West to Maine. Among its many breaks along the coast is the one at the St. Mary’s River where cyclists have to take a long detour along U.S. 17.

Friends of the Amelia Island Trail has mounted a push to persuade the National Park Service to amend its concessionaire to split ferry service between two terminals, the existing sole provider in St. Mary’s and another on Amelia Island. The online Fernandina Observer says that US Representative Andre Crenshaw and US Senator Bill Nelson are aiding McCarthy in his efforts.

Folks interested in taking a cruise on one of Captain McCarthy’s boats can call (904) 261-9972 to book passage or go to www.ameliarivercruises.com.

Pension Crisis Coming In Fernandina Beach? Billionaire investor Warren Buffett says in his March 1 Berkshire Hathaway Inc. annual report letter that pension plans threaten the financial health of U.S. cities and states more than taxpayers realize and that the next decade will see a lot of “bad news” about public pension plans. Bloomberg News reported that this year’s Berkshire Report included a memo about pensions that Buffett wrote to former Washington Post publisher Katharine Graham in 1975 where he said: “Local and state financial problems are accelerating, in large part because public entities promised pensions they couldn’t afford. Unfortunately, pension mathematics today remain a mystery to most Americans.” Fernandina Beach’s elected officials need look no further than Jacksonville to see what is soon headed our way unless action is taken, but so far nobody has spoken up and Buffett is right about the electorate being ignorant of the issue….but so are those in charge.

All About Beer: Florida beer drinkers can find out all they need to know about their favorite beverage by going to beerinflorida.com and its associated Facebook page https://www.facebook.com/BeerInFlorida, sites created by Gerard Whalen, who recently authored the book “Florida Breweries.” Gerard and his readers are as frosted as I am and many of you are, over the biased state law that prevents craft brewers like the one coming to downtown Fernandina Beach from selling 64-ounce growlers due to pressure and money being handed out to legislators by large corporate distributors such as Budweiser with Gerard saying it has “Florida’s craft beer industry on fire.” Thanks to Gerard for linking to this blog on his sites recently.

Speaking of Beer: There will lots of it flowing tomorrow, Saturday, March 29 from noon to 9 pm at Main Beach as organizers raise money for the 8 Flag Playscapes all-accessible children’s playground behind the Atlantic Recreation Center near Egan’s Creek. A series of live music groups will entertain beer swillers who’ll enjoy a selection of some 15 craft beers including my favorites Sweet Water and New Belgium. Others include Samuel Adams, Southbound, Lagunitas, Sierra Nevada, Intuition, Ragtime Tavern and Seafood Grille, A1A Ale Works, Seven Bridges Grille and Brewery, Swamp Head Brewery, Cigar City, Engine 15 and Mile Marker. Don’t like beer? Well, then Oyster Bay Wines will be there handing out samples of their product. Food trucks will also be on hand.

And Speaking Of The Beach: The 2014 Amelia Island Blues Festival announced that its September 12-13 event is moving from the downtown harbor area back to Main Beach with tickets going on sale May 1. For more information go to www.ameliaislandbluesfest.com.

Con Artists In charge: Last week, the U.S. Senate Environment committee released an astonishing report that uncovers a biased, politicized and troubling process for examining scientific evidence at the Environmental Protection Agency. The 67-page report highlights how science and scientists were ignored. More troubling in this end-justifies-the-means tale is how industry and America’s taxpayers and consumers continue to foot the bill for this process. Source: Georgia Public Policy Foundation.

Hail Obama: Current Merchant Marine and Former Florida House Mermaid Bartender Alex Watts continues to bounce around ports on the East Coast of Africa where he reports that all cab drivers he’s encountered in Kenya insist they are related to Barack Obama. Humm, how can that be?

The Times They Are A Changing Department: Until the mid-1980s in the US cigarette smokers were pretty much accepted and pot smokers were considered deviants but today if you even flip a cigarette butt out of your car window in Illinois you could face a $1,500 fine; a $250 fine for smoking in a public park in Boston (even one of those electronic vapor gizmos); a $500 fine in Oregon for smoking in your own car if there’s a person under 18 with you; and so on. But want to smoke a joint? Not a problem in Colorado and Washington which legalized pot for everybody while citizens of many other states are asking for more lax rules for dope smokers while continuing to crack down on tobacco users. New Jersey is even considering a tax on pot to pay for roads. Maybe these trends start at the top. I’ve heard that our current President says he stopped smoking, but haven’t heard a peep from him on whether he’s still partaking of the hard stuff he admits he used in his youth.

Celebrity Magnet: You never know who you’ll meet at Barb Kent’s house. The first time Linda and I were invited to an event at Barb’s island home across from Egan’s Creek we met former Slovakian Prime Minister Dr. Evita Radicova, while last week at an event at her home we were introduced to Jane Cooper, JP, former “Her Worship, Mayor, London Borough of Wandsworth,” and Duchess of Redcar, who also happens to be Barb’s first cousin as I learned at this gathering that Ms. Kent’s parents were both British subjects.

Drinking, Dining & Dancing:  Folks tell me that the traffic circle at the intersection of Fletcher and Sadler might need a warning sign on the South Fletcher exit side as male motorists crane their necks to peek inside Hammerheads particularly on Bikini Sunday. Maybe a “Caution! Bumps Ahead” warning would be appropriate. If you’d like to sit at home and shop for your favorite wines go to www.atasteofwinebysteve.com to browse the shelves or take a look at what’s new at the popular wine shop Steve and Donna Raszkin operate at 5174 First Coast Highway and then call them at 904/557-1506 to place an order. Faithful reader Cal Atwood tells me that Baxter’s regulars who have been used to the bartending duo Matt and Mike will soon welcome a new cocktail slinger in Kay Herrington as Matt Dexter is departing for parts up North being replaced by long-time employee Kay, who will now compliment Marine Mike Dougherty behind the bar at the popular 4919 First Coast Highway eatery. Call ‘em at 904/277-4503. When the Girl Scouts were peddling their cookies in front of Publix recently Mark Keller was one of their most frequent customers, bringing boxes back to Tony’s Pizza and trying out his new “fried cookie” recipes, which turned out to so popular that he expanded using cake, cream puffs, candy bars, etc. So if Tony’s doesn’t have the cookie, candy, etc. that you want, then go next door to Publix, buy your own, and Mark will fry it up for you. Or if you want gourmet fried sweets make your selection from the Ompa-Lompas at Tony’s other next-door neighbor Peterbrookes. Call ‘em at (904) 277-7661. I have been told that the folks who took over the shuttered downtown restaurant Bonitos are working to get it refitted and all permits in order so they can open a Southern style (not a meat-and-three) restaurant in time for Shrimp Festival. Lunch and dinner bargain hunters who seek low prices without sacrificing taste need to check out American Legion Post 54 at South 3rd  St. and Elm where Pam (Big Red) LeClair prepares lunches from 11 am to 1:30 pm that don’t exceed seven bucks and even delivers if you call (904) 261-7900. Where else can you get a cheeseburger and fries for $5.00? Dinner is served from 5-7 pm. And they’ll even cook you up a mess of ribs for $20 if you give ‘em a three-day notice. Look for some interesting changes to the menu at George Sheffield’s Surf on Fletcher as Arnaldo “Papi” Gonzalez, who was most recently chef at Amelia River Golf Club, another Sheffield holding, takes over the kitchen of that island icon promising some exciting new dishes but also pledging that the popular mashed cauliflower will remain on the menu. Call ‘em at (904) 261-5711. Rumor has it that long-time Yulee family business Murray’s Grill will be sold to Bono’s BBQ.