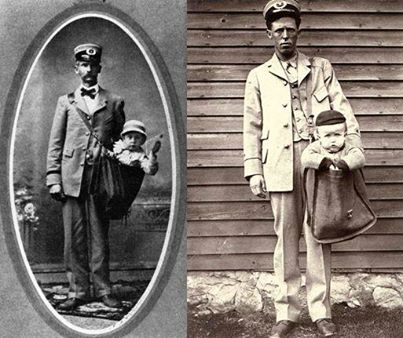 “Going Postal” 100 Years Ago Was a Family Travel Bargain

In 1914 if junior wanted to visit granny and granddad, you could just drop him off at the local post office, slap down a little less than 20 cents, and off he went via parcel post.

The boy wore a tag around his neck showing it had cost 18 cents to send him through the mail. He was transported 25 miles by rural route before reaching the railroad. He rode with the mail clerks, shared his lunch with them and arrived in good condition, the article said.

Several other instances of children being transported by Parcel Post were reported in the press over the next few years before the Post Office finally clamped down on such occurrences for good, with the Times reporting that: “Children may not be transported as Parcel Post.”

No wonder the Post Office is bankrupt all the good ideas are forbidden.

Watts Up With Alex? About a year and a half ago Alex Watts, one of my favorite island barkeeps, was slinging drinks at the Florida House’s Mermaid Bar while awaiting his Merchant Marine orders. Today if all goes according to schedule Alex, now a crewman aboard the US ship MV Advantage, should have left port in Casablanca, Morocco this past Wednesday to take on fuel in an unknown Arabian Peninsula port, then head out on the Mediterranean Sea toward the Suez Canal on his way through pirate invested waters to Djibouti, Somalia where his ship will dock for three to four weeks unloading grain for hungry citizens of that forlorn country. He says the ship will be escorted through pirate waters with a group used to handling those high seas thugs but Alex is used to seeing pirates up close, albeit not the blood thirsty, drug-addled ones off the coast of Africa, but the ones here on Amelia Island, where his Mother Judie Mackie and stepfather Lawrence are part of the island’s goodwill ambassadors of fun, the Fernandina Beach Pirates Club. If he stays on schedule expect to see seaman Watts back in our area this coming May says his proud mom.

Speaking Of Pirates: No one I can find can recall the last time three members of the Fernandina Beach High School Pirates wrestling team went to state finals, but seniors Josh Helm, Tharin Hessenauer and Thomas Monaghan were at the Lakeland Center in Lakeland, FL a few weeks ago representing our island high school in the state championships prompting coaches from perennial state powerhouses to gasp impressively: “Where did these guys come from?”  In two short years Coach Jimmy Hessenauer has turned the school’s grappling program around and is also the proud father of wrestler Tharin. Oh, just a little more than 20 years ago Coach Jimmy was a member of that same Pirate wrestling team.

Milo Is Back: In an earlier posting I mentioned that the island could use a cobbler since we haven’t had the services of one since Milo Pajevic’s shop shuttered. Well, I’ve been told that Milo is back in business at his old location at 1617 South 8th Street, across from the First Baptist Church with those reporting his sighting saying his work is exceptional and reasonably priced. I can’t locate a phone number but have a bag of shoes in the back seat of my car in need of repair and buffing and hoping that Milo is on duty next time I drive by his place.

I Told You So Department: According to a nonpartisan Congressional Budget Office report issued Tuesday, Feb. 18, the Obama Administration’s proposal to increase the minimum wage from $7.25 to $10.10 will cost the country roughly a half million jobs as well as increase prices. In addition, many receiving the increase in hourly wages are folks that are not in low-wage families and while some folks will receive a small increase in pay, those being laid off because their employers can’t afford the legislated pop in pay, will be destitute.

Bank Eye Candy: If you want to meet one of the prettiest, hardest working and most personable people on the island stop by the South 14th Street CBC National Bank and say hello to Teller Kari Haynes, and even if you don’t bank there drop in if only to ask her for change for a nickel, but don’t tell the branch manager, I sent you, as I am one CBC customer who has been removed from the Christmas card list of this no-nonsense, all-business, female version of Henry F. Potter. You can’t miss Kari, she’s the eye candy who sits next to the bowl of lollipops at the teller counter and next month will try out again for her third year as a Jacksonville Jaguar cheerleader. While the Jaguars are rebuilding their 4-12 team, Kari and the other team cheerleaders will busy themselves with a variety of appearances including a trip to London as well as visits to hospitals and hospices to provide cheer to patients, particularly children. CBC is lucky to have an employee like Kari and as a customer I always feel cheered after stopping in and chatting with this charming young lady with the perpetual smile.

Overheard In A Downtown Bar:  “A slut is just a hooker with no sense of economics.”

More Government Intrusion: If you discover that junior stole a hundred bucks out of your wallet and took his girlfriend to dinner, would you sue the restaurant to get your money back? Probably not, and even if you did your case probably wouldn’t get very far. So why did the Federal Trade Commission say Apple had to return some $32.5 million to thousands of parents for items their kids purchased on their mobile devices? If a kid’s folks are stupid enough to hand over one of those devices to junior they get what they deserve. And why is the government involved? Good grief.

If You Liked The USSR, You’ll Love This: The Affordable Care Act, the program that the administration said was supposed to enable millions of uninsured Americans to obtain health insurance, has instead tossed millions off the health insurance rolls. And those targeted folks that aren’t insured have shown no interest at all in signing up, even if they could get on the web site. Its starting look a lot like the former Soviet Union’s old agricultural five-year plans for collective farms, where politburo members promised the numbers would improve just as soon as they found some seed and could get the tractors working.

Hot Air Department: The 2013 hurricane season officially ended this past November 30, the quietest season since 1982. In fact, a mere two hurricanes (both category 1 strength) formed. Conservative politician and activist Gary L. Bauer explains the significance: “When Hurricane Katrina struck in 2005, Al Gore predicted that global warming would cause such super storms to become the norm. As usual, Gore got it wrong. Why does this matter? Because the administration is aggressively pursuing environmental policies that will dramatically affect the economy and your standard of living based on a theory that is increasingly suspect. The left is using environmental alarmism as one more way to expand the size and scope of big government.” Source: Patriot Post & Georgia Public Policy Foundation.

Drinking, Dining & Dancing: Walking into Centre Street’s Amelia Island Coffee Shop recently “former” store owner Mark Brackill introduced folks to the new owners, Matt and Rachel Mueller, a young couple who attended school on the island and actually met at the shop as teenagers when they both worked there a number of years ago. The Amelia River Golf Club off Buccaneer Trail is open to the public and is now serving special dinners Saturday’s 5:30-8:30 with talented Chef Arnaldo “Papi” Gonzalez in the kitchen and personable barkeep Chuck Singleton handling the libation department. Papi’s menus are as tasty as they sound e.g. chorizo & white bean soup, scallop ceviche, farfalle pasta with grilled chicken, etc. with many more as well as fascinating sides and desserts and one of the best values on the island in a gorgeous setting. Call ‘em at 904/271-4039, because they would like you to make reservations. Until the Dog Star Tavern’s liquor license is nailed on the wall, beer and wine lovers are in for a treat with happy hours running from 4-7 pm featuring half off draught beer and wine with the shapely Crystal Foster pouring. Call ‘em at 904/277-8010.When one of the Salty Pelican owners, Al Waldis, told me that his Uncle Dick and Aunt Kris were coming to visit from Windsor, Ontario I jokingly suggested he tell them to bring as much Black Diamond cheddar cheese as they could legally haul across the border, since that Canadian specialty costs as much as $22 a pound here, and even if you’re willing to pay that price, it’s hard to find. So imagine my surprise when watching a game at the Pelican, Al introduced me to his just arrived Canadian relatives who handed me a bag of the extra strong, long-aged Canadian pressed curds that I’m now enjoying with a plate of radishes, chutney, and a bottle of ale, a tradition stemming from my Canadian heritage, if you know what I mean, eh!

An Observation: Whenever I come in contact with or see kids walking or biking back and forth from Fernandina Beach High School and its next door middle school I am impressed with how neatly dressed and polite they are, making it obvious that there’s a lot of good parenting going on in these parts.

Hi, Dave. Regarding the “I told you so” department, just thought I’d add these conclusions from the CBO report that you forgot to mention – that raising the minimum wage would lift 900,000 families out of poverty and increase the incomes of 16.5 million low wage workers in an average week. To bring it all closer to home, also consider some observations from Steve Rieck’s recent report to the City Commission – that there is a “growing divide” between our city’s rich and poor, and that more than 13% of Fernandina residents live below the poverty level. The CBO report can be cited to support either side of the minimum wage question. There are no easy answers, but it’s important to ask the questions. What would your proposed solution be?