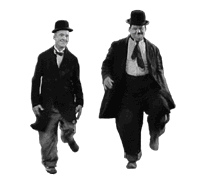 Just when you think the politicians and environmental wackos in Fernandina Beach couldn’t get any crazier they do. And when they combine their efforts it gets downright hysterical.

If you’re in town November 19, make sure to attend the Fernandina Beach City Commission “workshop” beginning at 5 p.m. at city hall. Get there early for a good seat and get ready for some aisle-rolling, knee-slapping, laugh-out-loud material as two wild and wacky Commissioners — Johnny “Moonbeam” Miller and the smirking Mike “Left Coast” Lednovich — team up to perform a “Plastic Straws” routine.

A note from City Manager Dale Martin’s office alerted me to the performance, oops, I mean workshop, and Administrative Services Manager Nicole Bednar confirmed to me that the session was placed on the agenda July 2 by Moonbeam with Left Coast suggesting the workshop. However, she didn’t refer to them by their stage names.

I’m not privy to what’s in the skit, but insiders tell me that the Moonbeam-Left Coast Plastic Straw sketch will make Monty Python’s Search for the Holy Grail and Mel Brooks’ Blazing Saddles look like serious dramas. This “do not miss” show should keep the audience in stitches as the two describe how plastic straws are destroying the environment, melting glaciers, raising sea levels, eliminating endangered species, and frightening small children.

I understand it’s a routine that borrows heavily from material performed at similar venues in California for several years and the two actors have adapted heavily from it for their Fernandina Beach audience.

The performance is rated PG but not recommended for the extremely dim and gullible.

In other local environmental shenanigans and performances, the trio of extremist groups – Amelia Tree Conservancy, Conserve Amelia Now and the local branch of the Sierra Club — all hell-bent on leading us out of the muck of our insensitivities, are conjuring up additional plans on how they can continue to seriously aggravate the majority of area residents.

During their most recent Politburo session at Story & Song Book Store, the three groups met to lick their wounds after Administrative Law Judge E. Gary Early sucked the wind out of their sagging sails squelching their hopes of stopping the Citrona Road Amelia Bluff housing development.

Margaret Kirkland, an ATC board member WHO DOES NOT live in Fernandina Beach, but continuously skulks around in it telling property owners where they can stick their property rights, said her group is actively seeking other avenues to halt any sign of progress in the city.

Her “the end is near” prophesy will be realized she says unless commissioners and city management listen to her and legislate that property owners do as she demands with their real estate.

The ill-conceived lawsuit by these three groups cost city taxpayers. between $20,000- $30,000 to defend and was funded by contributions to the cause including one by their poster-boy politician, “Left Coast” Lednovich. He serves on the City Commission yet contributes money to sue the city. There is something very, very wrong with this picture.

At their Politburo session she lamented the fact that Florida is a state “with strong support for property owners’ rights.” That’s a sharp stick in the eye for the likes of Kirkland, who suggested to the group of like-minded tree huggers that they move to infiltrate the city staff and stack the commission by urging “conservationists” to run for office.

Commenting on the losing Amelia Bluff lawsuit she said: “We didn’t have any choice about whether to go forward with this. The community demanded it.” Really? I don’t recall demanding it. None of my friends demanded it. The only people I know of that demanded it were the handful of loud, obnoxious, anti-property-rights extremists, and Left Coast Lednovich. Oh, and Ms. Kirkland, who DOES NOT live here.

The folks making all these demands are the same people who worship at the alter of Michael Mann, the architect of the discredited ‘Hockey Stick’ graph who tells people to believe the science but was implicated in manipulating data in Climategate and refuses to provide the data to back up his graph.

These people claim superiority over the rights of property owners and when denied the righteousness they feel they are due throw shrieking spittle-flecked tantrums. They’re amusing to watch but can be financial devastating if not controlled by vigilant citizens at the ballot box. Having more than two “Moonbeams” and “Left Coast” Lednovich’s on the City Commission would not be a laughing matter and would bring the economic curtain down on our community.

Just Wondering: Bernie Sanders said Cuba has the best health care in the world. So, what hospital In Havana did he go to for his heart stint operation?

The Demoban: The Democrat Party is the closest political entity this country has to the Taliban. Its obvious objective is to slow the economy and make everyone dependent on a government run by them. Let’s see what have the Democrats given us so far: ISS and its caliphate, Antifa, Black Lives Matter, the MeToo Movement, a war on police, an open southern border and millions of illegal aliens, and a failed and expensive national health care program, among others. They have no new agenda. Their campaign platform is bleak. In their outrageous “New Green Deal” they’re calling for banning air traffic, outlawing the internal combustion engine, eliminating cows (they fart too much they say), and dismantling the oil and gas industry. In spite of a roaring economy, rising wages, more jobs than job seekers, unemployment at record low levels among all demographics and low inflation, a record-setting stock market, and a healthy and strong military, the bad-news Democrats want to slam on the brakes on all of this in an ill-conceived and lame attempt to impeach the president responsible for all the good news. They have no crime, only an impeachment hearing in search of a crime. In their campaign for the presidency they advocate for socialism and open borders, health care for illegals, slavery reparations (whether you were a slave owner or not) and a guaranteed annual income compliments of the US taxpayer. In regard to the culture they are reduced to promoting gender-free restrooms; telling little girls they can be little boys and telling little boys they can be little girls; transgender rights; and a “white male privilege” program designed to convince masculine white males to become weenies without a cause. Oh, they also want to disarm all Americans and get rid of the Second Amendment. They’re also eyeing the First Amendment saying it promotes “hate speech.” The Democrats have become psychotic in the causes they supports. I think any member of the Taliban would have as good a chance of winning the Democrat Party’s nomination for President as any of the far left-wing screwballs currently running. I don’t see much difference between the two groups, except not all the Democrats have taken to wearing hijabs and turbans yet.

Dangerous Dems: The US is currently ranked third in the world for murder. If you cut out numbers for Chicago, Detroit, DC, St Louis and New Orleans the country would be 189 out of 193. If you also eliminated Baltimore it might even be 191 of 193. All these cities are run by liberal Democrats, and most have black police chiefs. It is culture, not racism. The worst thing that happened to black communities was the welfare program that paid women to have babies and get the man out of the house.  It ripped apart the old culture of tight black families and now we have 70% of black babies born to single mothers. That creates a lot of the issues we see today in schools and these communities. The old family culture was destroyed.

Drinking, Dining & Dancing: Tonight, Friday, October 4, The Amelia Blues Project will perform from 6-8 p.m. for the last Sounds on Centre of the year, on the two blocks between Front Street and 2nd Street.