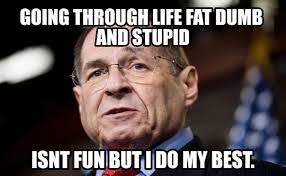 Former FBI Director James Comey and his staff, various members of the Obama Administration, and others who dirtied their hands with the phony Russia investigations, are proving Dean Wormer dead wrong.

Today Dean Wormer could well be addressing the Democrat members of the Senate Judiciary panel whose only defense of the devastating Horowitz Report has been incompetence, misjudgment, stupidity, arrogance and deception on a massive scale. Or he could have been personally addressing a puckered-up Nancy Pelosi, who attempted to talk while simultaneously adjusting her dentures while flanked by Oompa-Loompa Jerry Nadler and Ichabod Crane look-a-like Adam Schiff when they announced their two empty articles of impeachment.

As my Tampa Plant High School classmate and friend Larry Thornberry said in his recent American Spectator piece (https://spectator.org/dont-snicker-at-us-argentina/) “Trump is charged with two counts of defeating Hillary Clinton fair and square on November 9, 2016, by election rules that have been in place for more than two centuries. “OK, says Larry “this charge and specification is not precisely outlined in either article, but anyone paying the slightest attention to the toxic circus our national politics have become knows this is the high crime the Donald stands accused of.

“The charges come after interminable and unwatchable political theater in the House, overseen by Captain Ahab “Shifty” Schiff, the Mad Hatter of the House and chairman of the House Get Trump Committee, and Rep. Jerry Nadler of New York, chairman of the Other Get Trump House Committee, who is getting his back because the big boys picked on him in high school. These two nerds’ 15 minutes are beginning to feel like a year and a half.”

It must be very embarrassing to be a Democrat these days, and certainly something to never mention during a job interview.

Dr. Ross, an emergency room doctor at the local Amelia Island hospital, is a self-assured, matter of fact, blunt, no-nonsense guy. In my opinion his political bedside manner needs a bit of polishing. If he diagnosed me in his role as a physician and discovered some rapidly progressing disease, I assume he’d tell me: “I’ll make this as brief as possible since you’ve only got five minutes left to live.”

However, he did treat my wife, Linda, when she sprained her ankle a while ago and was extremely professional and courteous.

During our session I told the commissioner that as a city taxpayer I appreciated his vote against the Simmons Road Park. I also voiced my concerns over the commission paying attention only to the loudest voices in the city, which in my view don’t always represent the most reasonable ones. I was referring to the sign-waving, screaming, fist-shaking extreme environmentalists that swarm city hall each time anyone downtown mentions the word tree and developer in the same sentence.

Dr. Ross said he hears from many more people other than the environmental screamers, saying he receives hundreds of emails voicing opinions and that he answers all of them. (see related story below of one he missed).

I also expressed my concern over the city’s half mill tax increase to buy more land for conservation purposes when the city already owns one-third of the property within the city limits, unproductive property that is not taxed and produces nothing. I suggested to Dr. Ross that the city sell some of its assets, possibly the golf course or part of it, the marina and even the airport. Privatize them, I suggested, and give them a profit incentive. He politely and firmly suggested those are not options that he would consider and asked where I got my figures on city-owned assets. When I told him that I got the numbers from Northeast Florida syndicated columnist Steve Nicklas, he didn’t dispute the figures, but said “He doesn’t even live in the city.” Neither does Margaret Kirkland, the head of the Amelia Tree Conservancy but she seems to get an inordinate amount of attention from the commission. By the way Steve lives on Amelia Island across the street from the city, as the road he lives on separates the city and the county.

I also asked his opinion on the city merging operations with the county for cost efficiencies and to avoid duplication of efforts such as public safety, etc. He cited reasons why that isn’t a practical consideration as well.

However, he told me one thing that I hadn’t thought about until he brought it up, saying that while the city has seven parks and playgrounds, with Simmons Road soon to be the eighth, the county only has one.

The city also has two recreational centers, the beach, the marina, the airport, golf courses, etc., which county residents can all use without charge at any time. There has to be a way that city residents can get some financial relief, particularly since the city wants to keep gobbling up more land and inefficiently continue operating the assets it does hold.

The “How Come Nobody Ever Mentions This” Department:  The latest information I can find about the City of Fernandina Beach’s finances is depressing and I’m wondering if anyone has figures that paint a brighter picture.

Florida’s Leroy Collins Institute grades the financial condition of Florida’s municipal pension funds and the latest numbers I can find for Fernandina Beach are dismal. In 2017, the latest report card I could find, gave the city general employees plan a “C” and the Police Officers and Firefighters a “D”. These are not good grades but better than 2012 when both received an “F” and 2015 when they both received a “D”. In 2016 they were the same as 2017.

The latest report I found said: “Despite years of favorable investment markets, most municipal pensions have not substantially improved their funded ratios beyond the levels experienced before the investment declines of 2008 and 2009. This means that if investments go through another period of lower returns, funded levels will likely, once again, drop to concerning levels in many local government plans. Nearly half of the municipal pension systems still only receive a C grade or lower. That means a significant portion of pension systems are still at considerable risk.”

The taxpayers are on the hook for these underfunded numbers. Oh, according to other numbers I was able to scrounge up the city is some $64 million in debt, not counting the pension funds, and still wants to buy more nonproductive property for “conservation” purposes.

I asked Commissioner Ross to take a look at these figures during our meeting and assume he’ll check them out and provide an update. He’s a thorough researcher and I expect to hear from him soon.

What’s Next? The Gulag? Impeachment-crazed House Democrats obsessed with Russian-employed old Soviet Union style tactics are frantically “searching for a crime” to pin on President Donald Trump. Harvard law professor and liberal Democrat Alan Dershowitz said: “What they’re trying to do is what the KGB under Laurentia Beria said to Soviet Dictator Joseph Stalin: ‘Show me the man, and I’ll find you the crime.’ And that’s what the Democrats are doing” Dershowitz told host Mark Levin on the Dec. 8 edition of Fox News’s “Life, Liberty & Levin”.

Hello! Is Anybody Home? Long-time Fernandina Beach resident, Louis Goldman, is an informed, reasonable, and active voice in local affairs, so I listened with interest when he told me at the gym this week that he sent the city a letter November 24 reminding it that in 2004 the City Commission approved a modification in the Community Redevelopment Area (CRA) plan eliminating imminent domain within the CRA. By the way, the purpose of the CRA is to create Tax Incremental Financing (TIF) funds that can be used to finance capital improvements within the CRA.

Mr. Goldman, who is a member of the original CRA committee, sent his letter and the supporting documents, to all of the City Commissioners, the city attorney and city manager. He has yet to hear back from any of these folks. These are the same folks that feel they can take a valuable chunk of a private owners property to create a waterfront park that none of the city’s local businesspeople want because it would eliminate their customer’s parking spaces, notwithstanding the fact that it flies in the face of personal property rights.

In his letter to the city Lou pointed out that the FBCC, on June 15th, 2004, approved Resolution No. 2004-105 which included six modifications to the Waterfront Area Community Redevelopment (CRA) Plan that had been prepared by Ivey Planning Group, LLC, Real Estate Research Consultants, Inc. and Zev Cohen and Associates, Inc.

Apparently City Hall is taking a “There’s nothing to see here so just move along” attitude toward Mr. Goldman’s letter. Or based on their silence they either don’t care or are hoping nobody will remember and it’ll just go away.

Can anybody explain what’s happening here and if the tax paying residents are being screwed?

Drinking, Dining & Dancing: Two of my favorite Amelia Island residents are Jae Kim and his wife, Annette Biak, who own and operate downtown’s 4th Street Deli. This personable, hard-working couple, who have never offered up anything but a tasty meal, a sincere smile and good wishes, are pursuing a new adventure that I am sure will be as successful as their delicatessen across from downtown’s old post office. This creative pair have picked up the lease on the now defunct Gilberts’ Underground Restaurant on South 8th Street. The new venture will have one of the cleverest names for an eatery anywhere — Area 51 BBQ & Grill!  You’ll never know what’ll come out of their kitchen? The couple have teamed up with a well-known and experienced southern pit-master, to be named later, and Jae’s expertise to create a “combination of authentic American southern BBQ and South Korean BBQ.” The congenial couple will continue to operate their popular North 4th Street deli venture but will now be able to offer meals they were unable to provide due to limited kitchen space there such as grilled items including Cubans, gyro’s, steak & cheese, etc., but will not attempt to compete with the island’s burger joints. Jae tells me his Korean BBQ’s differentiation is in his sauces, in which meats are marinated for 24 hours and contains some 10-15 ingredients and use recipes he brought from his native South Korea. He says all the barbeque will be done on smokers and not inside ovens. There will also be Japanese Ramen meals with several flavors, spicy Korean kimchee, and Annette’s stone pot specialties and her homemade Korean dumplings. The American BBQ will be “off the charts” promises Jae – as good if not better than some of the most popular BBQ joints in northeast Florida — and will include brisket, pulled pork, ribs, Korean style chicken, etc. He says he expects one of the most popular plates to a be sampler platter including a variety of all the different styles and flavors. The new venture will also offer some interesting Korean rice wines as well as the traditional beers and wines. Catering will also be available.  It’s obvious they have put a lot of thought into this new venture and hope to be open the first of February 2020, the latest March 1  with hours being Monday -Thursday from 11 a.m. to 9 p.m. and Friday and Saturday 11 a.m. to 10 p.m. for lunch and dinner. They’ll be closed Sunday.  Call ‘em  at 904/277-224.