Home » Blog » Island Issues » Where Can You Send Your Kid For An Education Instead Of An Indoctrination? 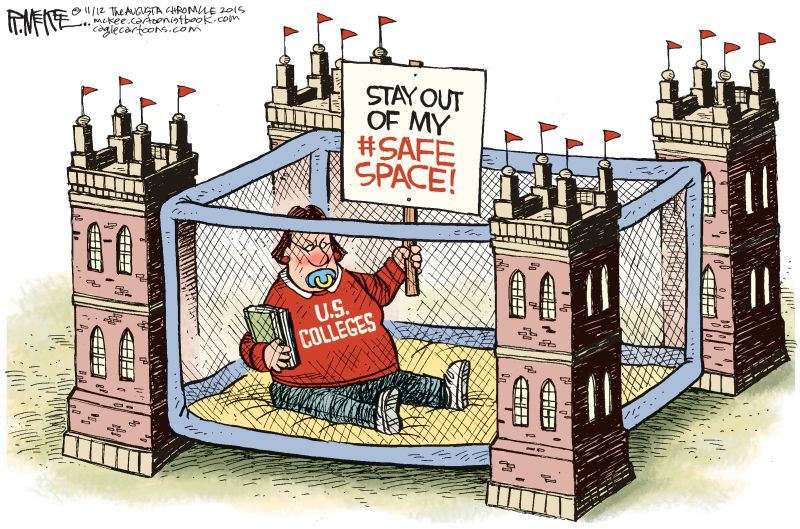 Where Can You Send Your Kid For An Education Instead Of An Indoctrination?

If I was still living in Atlanta, had a child ready to enter a university and had only two institutions to choose from — Emory University or Georgia State — it wouldn’t take more than a nanosecond for me to decide to pack junior off to State even if the kid had a full boat ride to Emory.

Parents pay huge sums of money to send their kids off to institutions of higher learning so they can takes classes in: how to watch television, the joy of garbage, queer musicology, alien sex (I’m not making any of these up) or to be taught journalism by a female University of Missouri professor who requested “some muscle” to toss a campus reporter out of a public event she didn’t want him covering. My favorite, and one that should actually be a prerequisite for any student entering college, is “Stupidity”, a course offered at Los Angeles liberal arts college Occidental that “examines stupidity…. in depth from literary, social and philosophical perspectives.”

But back to the topic at hand…

This past Monday, March 21, at Atlanta’s prestigious Emory University, which costs on average of about $65,000 annually, a group of students, that should be a case study in the stupidity course, protested on campus because someone allegedly wrote pro-Trump messages on their campus in chalk.

Despite the witless infantilism of their student protest they led to Emory officials eventually letting the students in for a meeting with University President James W. Wagner where, according to the New York Daily News, at least one student  broke down in tears. And the student government association is now offering emergency counseling for students triggered by the Trump 2016 campus chalking.

My across town choice of Georgia State’s student body isn’t this insipid and its school officials are not constantly on guard to protect their students from evil “wrongthink.” I saw photos of these chalking comments and all of them were anemic “Vote Trump” and “Trump 2016” statements, but it apparently was enough to leave the delicate Emory students shaken, scared, tearful and unable to sleep.

Clay Travis of Fox Sports wrote Wednesday, March 21, that “these kids are going to an institution of learning (and whining) that costs $65,000 per year– and this is what’s getting them worked up. It’s irrational, but also tragicomic that a mere political expression in chalk–that can be removed by water–has led to campus officials offering these progressive snowflakes a chance to see the shrink because they just can’t deal with certain aspects of real life. Students of Emory: we’re a nation that allows for people to hold differing opinions on a variety of subjects. You know, part of that whole diversity bit you love to espouse…until someone says something that you don’t like.”

On the other hand my school of choice, Georgia State, is mostly a commuter campus, which means that a large portion of its student body is required to come in contact with the outside world on a daily basis. And it costs a lot less than Emory, a whole lot less.

Here’s how the wussy Emory students responded as reported in the New York Daily News:

“I’m supposed to feel comfortable and safe,” an unidentified student told the Emory Wheel. “But this man is being supported by students on our campus and our administration shows that they, by their silence, support it as well…I don’t deserve to feel afraid at my school.” Sophomore Jonathan Peraza shouted at the administration: “You are not listening! Come speak to us, we are in pain!” and “It is our duty to fight for our freedom,” according to the student newspaper. Several held signs saying, “#StopTrump2016.”

What Emory freshmen students desperately need is a mandatory course in Western civilization that would at least provide a study of the culture in which they find themselves. And what their parents need to do is yank their weeping, spineless progeny out of this school thus cutting off the cash flow that funds this drivel. That would get the attention of school officials.

I’m sure employers will be clamoring to shovel cash at these “See what a trophy for everybody gets you Bernie Sanders supporters” upon graduation. Don’t most companies need employees that will stammer with indignation and break into tears when confronted with a statistic contrary to theirs? Well, I’m thinking that with the exception of the government, media and higher education,  jobs for these “snowflakes” bearing a surplus of unpleasantness, will be scarce.

Corporate recruiters should be lining up at Georgia State.

Get Out Of Here With That *** And Don’t Come Back No More! While riding my bike to the McArthur YMCA Wednesday I spotted a cell phone on the boardwalk separating Crosswind Drive from Jean LaFitte Drive, stopped, and picked it up figuring I’d call the owner to come retrieve it once I got to the Y, however, that turned out to be more of a chore than I expected. When the phone began ringing I tried answering it but was unable to do so since the phone instructed me to enter the owner’s pass code. Then a message appeared on the phone saying: “This phone is lost” and a number appeared on the screen. So I pushed the call symbol only to have it answered by a fax machine following many repeated attempts . Following my workout I went to the Sadler Road ATT store to see if they could locate the owner. An ATT employee backed away from the phone as though it was contaminated with Ebola, quickly telling me to take it to the police station. So I went to the Lime Street police department facility, filled out a brief report and was told to wait for a policeman to come in from patrol and explain where I found it, etc. At this point the lyrics to the 1950 Phil Harris song “The Thing” began running through my head. The lyrics in that song take the form of a first-person narration, describing the discovery on a beach of a box and whatever is in the box is never revealed. When the lyrics call for “The Thing” to be named, the vocals simply pause for three percussion knocks. For example, the first verse ends, “I discovered a [***], right before my eyes!” The singer is delighted by a discovery that repels everyone else. He takes the box into a pawnshop hoping to sell it, but is thrown out by the proprietor with a threat to call the police. “Running for his life,” the singer takes the box home to his wife, who also kicks him out and orders him never to return. Next, the singer offers the box to a hobo, receiving his assurance that he’ll take “most any old thing,” as he is desperate; but when the homeless man sees what’s in the box, he runs away. The hapless singer proceeds through the rest of his life unable to rid himself of the Thing, until he dies and arrives at the gates of Heaven, still with the box, only to be ordered by Saint Peter to “take it down below.” The song closes with the singer’s warning not to open a tempting box found on the beach as he did, or “you’ll never get rid of the [***], no matter what ya do!” I left the darn thing I found at the police station without waiting for the policeman to arrive and hope I never see the *** again.

Nuts! Local resident Raffaela “Marie” Rizzo Fenn worked for peanuts. And as a result a lot more folks are eating peanut products especially peanut butter. Ms. Fenn, who is currently president of something called the Ottima Group, will be the guest speaker at the European American Business Association’s (EABA) next meeting, Tuesday, April 12, 6-8 p.m., at the South 3rd Street Florida House, served as the inaugural president of the USA National Peanut Board and according to the EABA announcement I received , over a twelve-year period, she helped double the daily use of peanuts; and moved daily peanut butter usage up 71 percent. The public is invited to listen to her “nutty” story at a cost of $15 which includes hors d’oeuvres that may or may not include peanut butter and jelly sandwiches. A cash bar is also available.

Compare This: Local writer Suanne Thamm, in her periodic Thamm-O-Gramm, recently opined on growing old and comparing this generation’s technology and culture to that of her generation. While this is a time-worn topic I think Suanne painted a vivid verbal picture and made some interesting comparisons in her succinct and well-crafted essay, of which the following is just a brief example:

“While I am quick to embrace technology that allows me to minimize time spent on household chores, save money with energy saving appliances and cars, and pay bills with the click of a mouse, I am also aware that speed does not necessarily bring quality to our diets, our spending habits or our communications.  Microwaved lasagna doesn’t hold a candle to the real stuff smothered in mozzarella and fresh tomato sauce and slowly baked in a conventional oven.  When you activate Amazon One-Click you sometimes buy things before you really think the purchase through.  And as for communications … well, grammar and syntax have gone the way of the buggy whip on social media.”

Ms. Thamm is an exceptional writer whose many contributions to the online Fernandina Observer are always interesting and most often provide ample food for thought.

Speaking Of Food For Thought: “Who discovered we could get milk from cows, and what did he think he was doing at the time?” — Comedian Billy Connelly. And while we’re on the topic, I’ve always thought that a cool name for a brassiere company or lingerie store would be “The Booby Trap” or the “The Booby Hatch” or is that just wrong or has someone already beat me to those labels?

Help Wanted: Interim Fernandina Beach High School football coach Josh Charles has resigned and the pirates are seeking someone else to take over. According to the Florida Times-Union the school’s Athletic Director Ken Roland is seeking applicants to get the 2-8 team on a winning track after losing three coaches the past three years.

Songs I’d like To Hear: The late Atlanta-based radio personality Ludlow Porch had a list of song titles that he said could be used to write decent country-western songs. Three of my favorites that remain unwritten as far as I know are: She Left Me Flat in Our Roll-Away Bed, Castro’s Heart Pumps Pee-Pee and Don’t Cross Mama When She’s Drinking Bud.

Holy crap! You can’t make this stuff up!!

Liked your Emory student rant but must correct you on the reference to the board of regents which has no role to play since Emory is privately run.

After the 2016 Braves season Turner Field will be converted to the Georgia State athletic complex complete with football, baseball stadiums and much needed dormitory housing.

AND I like the witfull and bounteous phraseology of “witless infantilism”.

Pretty sure the smarties at the school on North Avenue would take offense not being listed on your list of Atlanta schools.

Georgia State provided me with a fine education where I attended 3 of 4 years on the HOPE scholarship and was able to work full time while doing so. I worked my senior year in my broadcast journalism field at Fox Sports. I graduated with no debt too. Great school & lots of opportunity being in a big city. Go Panthers!

Georgia State University is one of the first Southern Universities to offer an International Business Degree as an undergrad, masters, or doctorate choice. Well respected school.