Home » Blog » Island Issues » Is City Of Jacksonville Guilty Of Identity Theft For Posing As Amelia Island To Conde Nast? 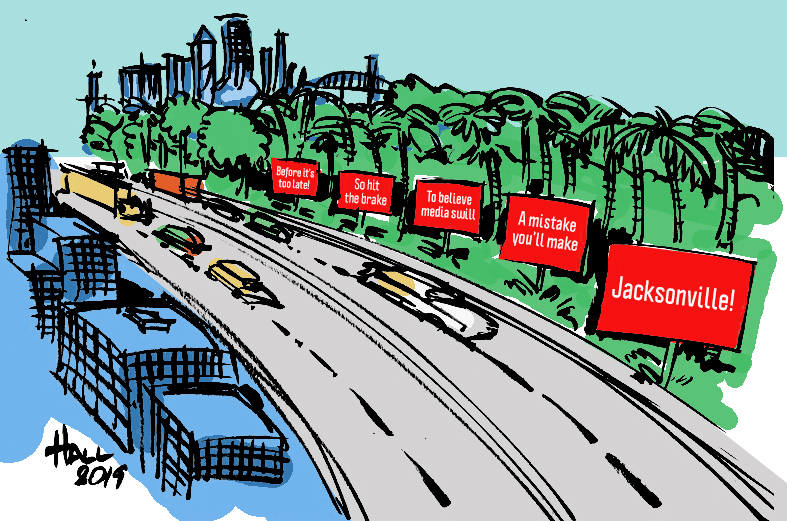 Is City Of Jacksonville Guilty Of Identity Theft For Posing As Amelia Island To Conde Nast?

If a city could be charged with identity theft then Jacksonville would be under arrest. Here’s why.

A few weeks ago U.S. News and World Report released a list of the “125 Best Places in the U.S. to Retire” and Conde Nast Traveler published the top 10, which included Jacksonville. Wait! What? Jacksonville?

Yep, it ranked Jacksonville number six while failing to mention that its residents are knocking each other off at a record pace, boasting the state’s highest homicide rate and one that continues to increase year-after-year. It also failed to note that Jacksonville’s drivers have a bad habit of running over their neighbors with remarkable regularity, making it the sixth most dangerous place in the US to take a stroll according to Business Insider. What it did include was a picture of the road-draped tree canopy inside Amelia Island’s Fort Clinch to illustrate the city but failed to mention it wasn’t located in Jacksonville.

“Best for: People who want a little bit of everything; with a city this size (nearly 16x bigger than Miami by land area), you are sure to find something you like. Restaurants and shops fill just about every neighborhood, and the city offers access to tons of hiking trails and marshes for kayaking. Jacksonville’s beach towns are home to many retirement communities, and good news: the cost of housing here is lower than the national median sale price. Better to use those hard-earned bucks for golf memberships and Jaguars season passes, don’t you agree?”

Possibly somebody from the Jacksonville Chamber of Commerce wrote that piece of slobbering pap.

The puff piece assumes retirees will be lured by the golf memberships, despite the fact that the popularity of golf is dropping like a rock with some 200 courses closing across the Sunbelt last year alone according to the National Golf Foundation. The trade group also reports that there’s been a 20 percent drop in the number of golfers nationally since 2003, a trend that continues.

As for the Jaguars football team being a lure, well so far it appears to be a disappointing “business-as-usual” season at Everbank Stadium. The only attraction there on Sunday is a bushy Fu Manchu moustache sported by its young quarterback, Gardner Minshew. Fans desperate for any glimmer of hope, paste fake ones under their noses each Sunday. That’s it. It’s sad when your football team’s only appeal is the facial hair on one of its players. Locals did the same thing when mustachioed Shad Kahn bought the dismal franchise a few years ago.

Kayaking and hiking in Jacksonville? Try that downtown and you’ll be mugged, robbed, raped or infected by watery toxins. I’ve never seen anyone hiking in Jacksonville except a few sad souls wandering down the side of an Interstate pushing pilfered shopping cats, which is a signal that their lives have seriously gone off the rails. Sure, you can probably find an inexpensive house in Jacksonville, but it’s in a zip code even the police are reluctant to enter.

One positive characteristic Jacksonville is well known for is its vast number of excellent hospitals and medical centers. Based on the city’s astronomical crime rate they’re necessary and they stay busy.

In the May TripSavvy publication Edward Jenkins wrote about Jacksonville saying: “With a rate of 44 crimes per 1,000 residents, the state’s largest city has one of the highest crime rates in America compared to communities of all sizes. In fact, your chance of falling victim to either a violent crime or a property crime in Jacksonville is one in 23. So, if you’re traveling to Florida, you may want to steer clear of this city and opt to visit the other 82 percent of Florida communities that are safer.” Why didn’t U.S. News or Conde Nast report that?

Mr. Jenkins article revealed additional statistics that don’t exactly encourage folks to visit Jacksonville much less retire there adding: “Property crimes range from burglary, larceny over 50 dollars, motor vehicle theft, and arson. And your chance of becoming a victim is one in 27, which comes in at a rate of 37 per one thousand people. The chance of having your car stolen in Jacksonville—either the one you own or a rental—is relatively high, also, at a rate of one in 367.”

It becomes understandable then why, for the past year or so, the folks that flak for Jacksonville have been attempting to pretend the city’s footprint extends further north, where many retirees prefer to live and future retirees would as well – Amelia Island.

The folks in Jacksonville are proposing calling Amelia Island part of “Greater Jacksonville”, a label nobody here wants, just the opposite. As one local social media critic who commented on the article put it: “WE ARE NOT PART OF JACKSONVILLE, NOR DO WE WANT TO BE. Let’s get that crystal clear, just saying.” The only folks that wouldn’t mind being associated with that depressing metropolis are those who want Amelia Island to limit further development, knowing that a Jacksonville brand would slam the brakes on growth hereabouts. I don’t know about you, but I’ve never once met a person who expressed a desire to work, live or retiree in Jacksonville. However, I don’t know anyone in Detroit or Newark.

Maybe the anti-development folks hereabouts could erect signs on I95 and Highway 17 to alert motorists who believe the hype that a Jacksonville paradise they read about is bit further down the road. They could be posted at the exits for Amelia Island and read like those advertising South Carolina’s bizarre tourist attraction South of the Border: “Keep going. You’re Almost in Jacksonville!” and “NO! Not here, Jacksonville’s just ahead.” Well, you get the idea.

Or the truth in advertising folks could take a hint from the old Burma Shave rhyming signs erecting the following:

So hit the brake

before it’s too late!

The U.S. News & World Report says its ranking of the country’s 125 largest metropolitan areas is based on happiness of local residents, housing affordability, tax rates, and healthcare quality. Florida takes up nearly half of the list.  How the heck did Jacksonville make that list? There’s absolutely nothing of interest to see or do in Jacksonville. Nothing. I’ve looked.

Go to https://www.cntraveler.com/galleries/2016-05-24/the-best-places-to-retire-in-the-us to  read the article. It says the best place in all of America to retire is the Gulf Coast’s Ft. Myers.

Speaking Of Truth In Advertising: The state of Nebraska takes it to extremes admitting that Nebraska is “the least likely state” when it comes to attracting tourists. Its new campaign boasts print ads with headlines such as “Lucky for you there’s nothing to do here.” Another one brags that the state is “Famous for our flat, boring landscape.” State Tourism Director John Ricks says “the new brand platform is defined by honesty.”

Jerrol Cohn, a Tampa Plant High School classmate of mine sent me the following that he got from a nuclear physicist friend of his. It makes sense to me.

Jerrol’s physicist pal says sending humans to Mars is a mistake since robots can do almost anything humans can do and do it much cheaper.

He explains that robots can take pictures, measure the temperature, bring back rock samples, etc. “The only thing humans can do is inflate our egos, but we’ve already done that on the moon…so why go to Mars?”

Makes sense to me.

Among other things, Elizabeth “Pocahontas” Warren has trouble with the truth. After repeatedly lying about falsely being of Cherokee Indian heritage to gain a teaching position at Harvard she continued to lie even after being called out on it. She is now lying about being fired from a teaching position in Texas, saying her contract wasn’t renewed because she was visibly pregnant with her first papoose. However, the school district in question offered to grant Warren a second teaching year and expressed regret when she declined to accept it. She quit. She wasn’t fired. She lied. Pocahontas speaks with forked tongue as it appears everything she’s ever said about her background has been stretched to fit her “I was a victim” narrative.

Warren is just one among the dozen or so zaniest characters to ever chase after the U.S. Presidency leaving Democrat voters to determine who among this crowd is the least nuts. Two of the most dangerous whackos are the socialistic duo of Bernie Sanders and Pocahontas, who want to tax Americans on their wealth. This is an outrageous confiscation program that would destroy wealth, not redistribute it, hitting present retirees hardest, followed by American workers, then tanking what’s left of the economy. Property and freedom are their targets as their programs would plunge the United States into a communal world of the Dark Ages. Their convoluted idea is to take wealth away from the most productive and hand it to the least productive. It’s punitive class warfare. The 1917 Bolsheviks (e.g. socialists) led by Vladimir Lenin accomplished exactly what Sanders and Warren are advocating almost overnight. At the time, in the early 1900s, Russia was one of the most impoverished countries in Europe with an enormous peasantry and a growing minority of poor industrial workers. It remained that way for the next 70 years under the communists with indiscriminate slaughter and imprisonment added to their abject misery. There is no difference in what the Bolsheviks accomplished and what this dangerous duo are advocating, although Sanders and Warren so far have avoided mentioning firing squads and gulags.

Democrat Party primary leaders at this point appear to be Biden, who is wandering mentally; crazy Uncle Bernie and his health issues; and “Pocahontas” who can’t be believed. The rest are a bunch of even lighter lightweights. The entire Democrat presidential lineup appears to have been choreographed by Donald Trump’s reelection committee.

Personal Responsibility? What’s That? Based on The Democrat Party’s presidential candidates’ performance last Tuesday evening pharmaceutical companies are to blame for addiction and overdoes; gun manufacturers and the National Rifle Association are responsible for mass shootings and gun-related homicides; automobile manufacturers and energy companies are behind pollution and climate change; etc.  Personal responsibility is an alien concept to any of the Democrats running for President. In an eloquent speech at Notre Dame University last Saturday — a few days prior to the debate — Attorney General William Barr addressed the waning of religion’s influence in America and how the left’s secularism has resulted in social pathology such as drug addiction, family breakdown and hordes of alienated young, angry males. Barr argues that these problems have spiritual roots and religion addresses them by stressing personal responsibility. The left’s answer says Mr. Barr, is to “merely alleviate these bad consequences.” He said: “Their reaction to growing illegitimacy is not sexual responsibility, but abortion. Their reaction to drug addiction is safe injection sites. Their solution to the breakdown of the family is for the state to set itself up as an ersatz husband for the single mother and an ersatz father for the children. The call comes for more and more social programs to deal with this wreckage – and while we think we are solving problems we are underwriting them.”

Drinking, Dining & Dancing: Sunday, November 10 the local Smoke N Da Cockpit Bar-B-Que team and the Green Turtle Tavern present “2019 Bar-B-Que and Brew”, a BBQ dinner with live music, to raise funds and collect toys for Fernandina Beach/Nassau County Toys for Tots. Attendees are encouraged to bring a new unwrapped toy. The $10 dinner includes pulled pork and a choice of baked beans or green beans. A side of pork ribs will be available for $5. Contact team members to buy tickets in advance. Tickets can also be purchased by contacting Toys for Tots Coordinator Allen Elefterion at 904-753-7630 or toysfortotsfb@outlook.com. Tickets are limited.