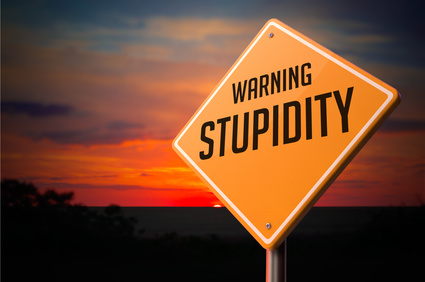 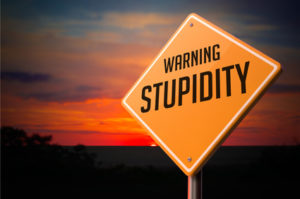 While trading emails about Hurricane Dorian with friend, Tampa Plant High School classmate, and American Spectator writer, Larry Thornberry, I noted that when I was in the local Publix it appeared they had over-ordered water as I heard an announcement requesting: “Assistance on Aisle 17, customer drowning.” I also said I found it ironic observing local liberal friends stocking up on gasoline and butane gas containers. Apparently the stores were sold out of solar panels and windmills.

Larry responded observing: “We do go a bit nuts when there’s a storm on the way, do we not? And the news coverage is so stylized. When you tune in to get the latest storm track, you have to endure 10 minutes of film of people picking over water, food, batteries and other items in stores like buzzards picking over dry bones. Then we have another 10 minutes of folks, beginning with the governor and going down to an assistant librarian, telling us that we should prepare, which we already have or know we should. The governor on these occasions always has this person standing next to him translating what he says – we presume – into sign language. (Heck, he might be signing, “Can you believe this guy is still banging on about buying water and batteries? Hell, there’s not an un-bought bottle of water or battery left in the state.”) I believe the signer in the latest press conference was a retired third base coach. The conference was momentarily broken up when two retired ball players in the back of the room stole second.

And then if the storm hits (sorry about this, but you got me started), you always have some half-wit standing out in it. And as a cow flies by he says stuff like, “As you can see it’s really windy out here, and the rain is very hard.” To which I say to the TV, “Really, you twit?  For Pete’s sake it’s a hurricane. If you had the sense God gave a chicken you’d go inside.” I guess the guy who gets this assignment is the poor sod who drew the short straw.”

It’s All About The Kids – Sure It Is! “While the Democrats shed fake tears for immigrant kids being separated from their illegal parents, 765,000 US citizen kids are separated from one of their military parents for as long as nine months,” pundit, author, financial advisor, and veteran Joel Ross reminds us. “Sometimes the parent does not return from battle defending the country as opposed to illegally entering. But nobody says a word. Some 2.7 million kids in the US have a parent in jail. But the Dems scream because 2,000 illegal immigrant kids get separated from their fake parents who rented them to cross the border. Do we hear the media cover any of this?” asks Ross.

Dey Are Not Der Going: The crazed socialists running for president in the Democrat Party, which includes all of them, often point to Norway as a model of socialistic success.

However, if they patterned their platforms after Norway’s system of government then they’d have to ditch most of their current programs including everything they’re preaching about immigration and the “New Green Deal.”

Shuey explains that people who immigrate to Norway must take a 300 to 600-hour course in Norwegian history and culture. “They must live in Norway for at least three years before they can apply for citizenship or receive any social benefits,” he adds. “They must prove that they have sufficient income to participate financially to the common good (pay taxes). During the minimum three-year period, an offense as simple as a parking ticket can disqualify one for citizenship approval. To be considered for Norwegian citizenship one must demonstrate that one can read, write, and understand the language (Norwegian) of Norway. There is no ‘Press 1 for Norwegian’ in Norway.”

“Norway’s population is 98 percent white. White is considered to be those people whose origins can be traced in any of the original peoples of Europe. Norway has allowed no refugee status-people to enter their nation since 1975. One must assimilate into Norwegian culture in order to be approved for citizenship.”

What Mr. Shuey didn’t mention is that Norway is one of the wealthiest countries on the planet and its wealth is attributed to its massive North Sea oil deposits, a fuel the Democrats and their loopy “New Green Deal” plan to ban.

There’s isn’t a single Democrat presidential candidate that would qualify to immigrate and become a citizen of Norway. To me, a Democrat-free society sounds very tranquil.

A Real Green Deal: Despite the hot air about climate change, America’s greenhouse gas (GHG) emissions are 13 percent lower today than in 2005, even with an economy that is a third larger, writes Bernard L. Weinstein in “The Hill.” This achievement says the publication isn’t the result of environmental regulations or the huge subsidies available to wind and solar investors; rather, it has been the increased use of natural gas that has helped reduce GHGs in the U.S. Source – The Georgia Pubic Policy Foundation.

Links & Drinks: Fernandina Beach restauranteur and former City Commissioner Tim Poynter had to fight city hall to get it done, but by September 16 he’ll tee off his latest concept — Gregor MacGregor Mini Links & Drinks at the corner of downtown’s Ash and Alachua.

The miniature golf course with a twist includes a full bar with a downstairs site and patio, and an upstairs area where folks can eat, drink and watch the mini golfers or something else. The menu will feature fast food items such as ice cream, soft pretzels, hot dogs, popcorn and other such stuff. Both areas will have large screen TVs for folks that want to watch pro golf or any other sport while enjoying a beer, glass of wine, or cocktail.

The new enterprise will fly the Green Cross of Florida flag that Scottish adventurer, mercenary, and con-man MacGregor planted during his short-lived invasion of Amelia Island in 1817. His “army” of 55 men deserted him when he failed to pay them, and the entire affair was over in less than three months.

Poynter’s inspiration may be the silliness of the original MacGregor expedition or the fact that the former commissioner’s middle name is McGregor. Either way, I figure his Gregor MacGregor’s Amelia Island venture will generate more green than Gregor MacGregor’s green flag followers received.

Tim expected the project to be completed far before September 16. Hurricane Dorian slowed things down somewhat, but not as much as the doofuses occupying Fernandina Beach’s City Hall. Despite the fact he knows how to wade through the obstructionist bureaucracy of Fernandina Beach’s city government, he still had to fight a costly and time-wasting battle with the city’s mindless money-grubbing zombies. You’d think the city would be shaking his hand since he built his handsome tax-producing enterprise on the site of a dilapidated rat and mice-infested building he tore down. But that’s not how things work in this city’s Byzantine mess.

Tim’s frustrating permitting process with the city lasted four times longer than MacGregor’s invasion and his short-lived government. Tim’s permitting process began May 28, 2018. While he traversed the asinine bureaucracy of the city, the cost of fees he was required to pay in lieu of providing off street parking spaces, rose by $500 per space due a new city fee schedule that took effect October 1, 2018. He had offered to pay those fees in advance of receiving a building permit, but the city said “Nope.” The city’s new fee meant that instead of paying the city $12,000 in lieu of providing eight parking spaces, he was required to pay $16,000. For Poynter, the extra $4,000 was too much. After unsuccessfully arguing his case to the deaf ears of vacant-eyed city officials he filed an appeal with the city’s Board of Adjustments (BOA) and won, but it was costly and time-consuming. The city doesn’t care.

He was told by the simple-minded twits than populate city hall: “That’s just the way it is in Fernandina.  And that’s the risk you take doing business here.” That should be the city’s motto. Gregor MacGregor and his motley crew makes these useless team of car-clowns look like models of efficiency.

We hope the affable Mr. Poynter scores a hole-in-one with his new venture.

Things I Wish I’d Said: “I wish everybody would go back into the closet.” – Josefa Heiifetz

Just Wondering Department: During the weather broadcasts for Hurricane Dorian I heard mention several times about the possibility of Indian River, just south of us, surging. Why haven’t the loony left tried to change the name of that tributary to Native American River or have they?

Drinking, Dining & Dancing: Last week I mentioned that J’s Tavern and The Sound House at 711 Osborne Street in nearby St. Marys, Georgia will feature midget wrestling, but didn’t say when. Two events are scheduled, the first at 9 p.m. Saturday, November 9 and the second at noon, Sunday, November 10 and will feature the Midgets With Attitude wrestlers currently touring the U.S. Prices range from $10 to $35. Call ‘em at   912/510-9400. I received notice from former Fernandina Beach Parks & Recreation Department Manager Jay Robertson, that the sanctioned Southeastern Ribs Championship will be held at Main Beach Park October 11-12. Its starts Friday, Oct. 11 at 5 p.m. and goes till 9.It resumes again Saturday, Oct. 12 at 11 a.m. and ends at 4 p.m. There’ll be plenty of BBQ, live music and games and vendors. Money raised from the event is given to the Northeast Florida Associates for Autism. Call Jay at 904/206-1464 or Guy Robertson at 904/753-1198 if you want to participate.