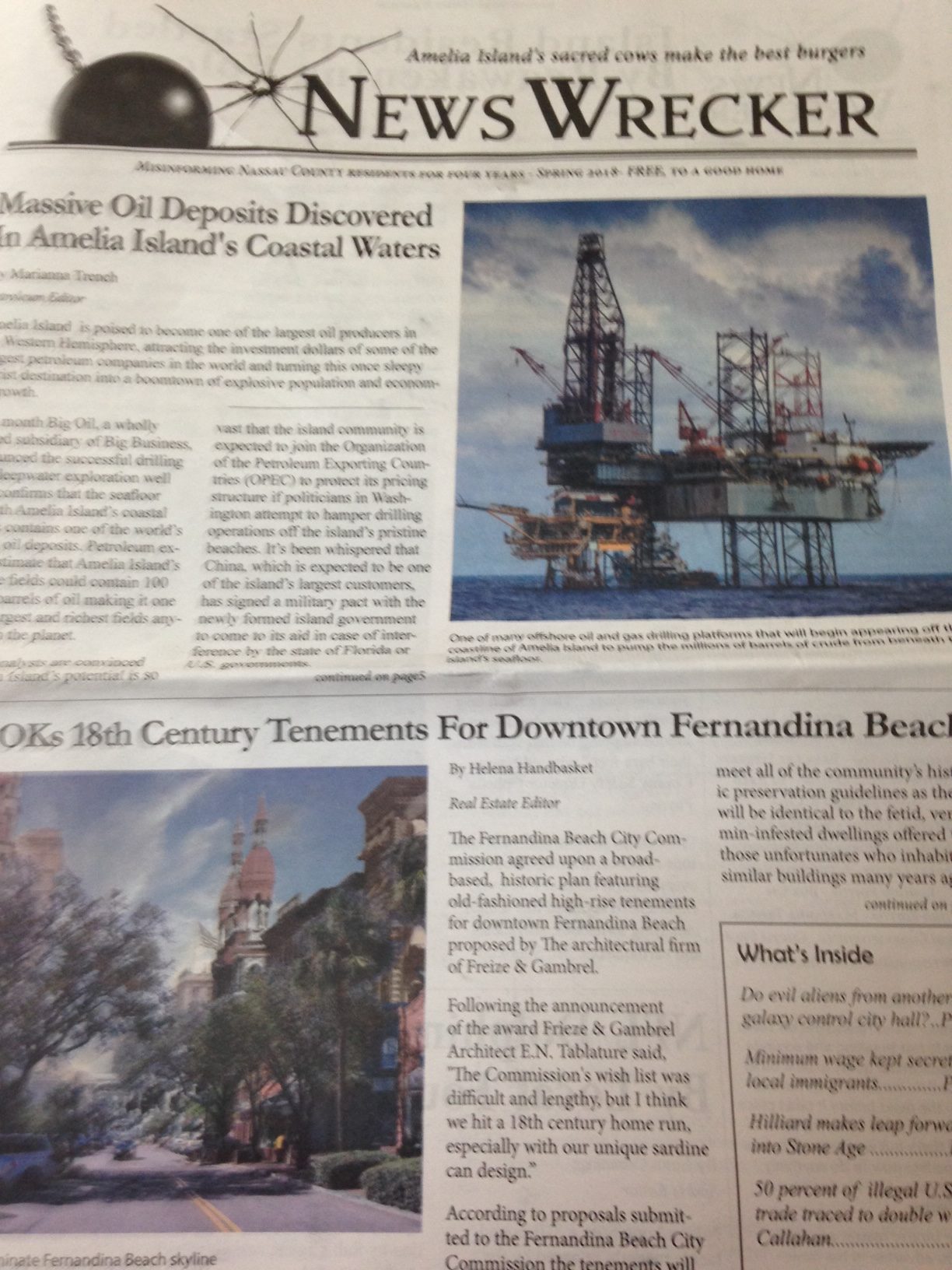 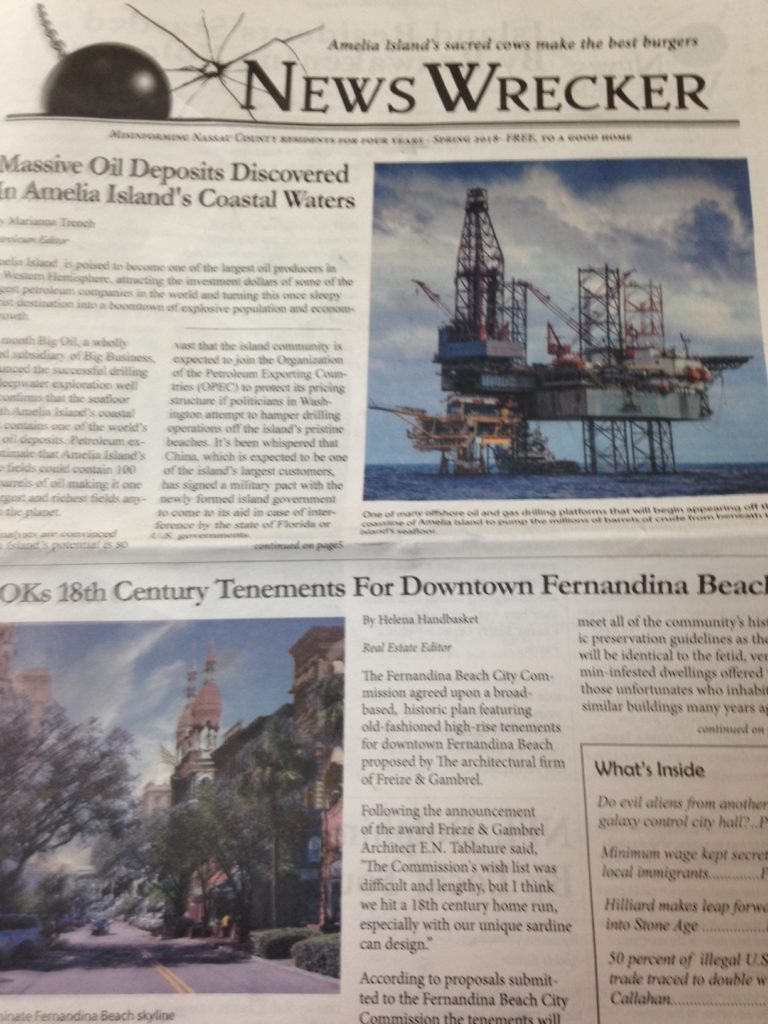 Is Amelia Island soon to become a petroleum boomtown of explosive growth due to massive oil deposits recently discovered in its offshore waters?  Is the Fernandina Beach Marina to become a mud wrestling venue? Did a Russian foreign exchange student meddle in a local high school’s student council election?

These are just some of the questions answered in the latest edition of the Amelia Island News Wrecker, a satirical tabloid newspaper that is being distributed this week.

An online version of the News Wrecker will be available mid May. This is the fourth year the paper has been published.

The tag line for the publication is “Amelia Island’s sacred cows make the best burgers” and its purpose is to generate laughs without resorting to obscenities and vulgarity. However, the one thing the paper can honestly boast of  is bad taste.

The last three editions can be read online at ameliaislandnewswrecker.com.

Visit Dunwoody, Georgia? The porcine proverb “You can put lipstick on a pig but it is still a pig” came to mind as I flipped through a copy of something that arrived in my mail recently called “America’s Best Vacations”, an advertising vehicle obviously desperate for content.

This 20-page publication provides readers with summaries of some of the most boring, mind numbing locales in the South that the editors of this thing consider vacation destinations. Unlike the News Wrecker it isn’t a parody. 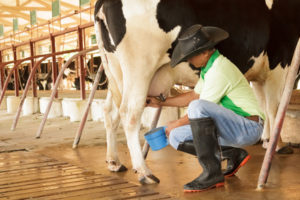 An article  headlined “5 Things to Do in Plano, Texas” listed number 4 as “milk a cow.”  I’ve been to Plano — a bedroom community northeast of Dallas — and, yes, milking a cow is probably the most exciting activity a person there could find to do other than feeding chickens.

And speaking of “milking”, the writer who managed to produce half a page of copy for a piece headlined “Dunwoody Is the Place to Get to” deserves credit, since finding anything more exciting to do there than taking an afternoon nap took incredible investigative reporting talent.

Dunwoody is a very pleasant suburb north of Atlanta that consists of housing developments, a couple of shopping centers and more housing developments. I lived in Atlanta on and off for many years, and believe me, there is nothing, and I mean NOTHING, to see or do in Dunwoody unless you consider grocery shopping and mowing the lawn vacation-worthy experiences.

Maybe the entire publication is a spoof and it all went over my head. But I had to chuckle when I read: “This is the place of endless options that are beyond the expected, beyond delicious, and beyond memorable. Dunwoody is not just a getaway, Dunwoody is the place to get to.”

If milking a cow in Plano, Texas and vacationing in Dunwoody, Georgia generate this much excitement for the writer I assume his or her hometown is a cure for insomnia.

Things I Wish I’d Said: My mechanic told me: “I couldn’t repair your brakes, so I made your horn louder.” — Stephen Wright.

Bring me Your Tired, Your Poor, Your Undocumented Democrats: The following was written by my Tampa Plant High School classmate and friend, Larry Thorneberry. It appeared initially in the American Spectator April 27.

In it Larry observes how far left governor of New York Andrew Cuomo is doing an excellent imitation of California Governor Jerry “Moonbeam” Brown to prevent federal authorities from picking up illegal aliens from New York jails and prisons.

“In an apparent case of Jerry Brown envy, New York Governor Andrew Cuomo has made it clear he will do what he can to assist anyone on Earth or the closer planets who wishes to crash the American party and live on our hospitality.

The Washington Times reports that Cuomo sent a “cease and resist” letter to federal immigration authorities demanding that they stop inconveniencing citizens of other countries living in New York illegally. He said he will issue an executive order to prevent federal ICE officials from making arrests at New York prisons and jails. He also says he will order New York state agencies to not ask anyone whether they’re a citizen of another country here illegally and to not give federal authorities any information that could lead to citizens of other countries here illegally being obliged to leave the U.S.

Do we need any further evidence that the position of the Democrat Party is that national borders are hate crimes, not a requirement of sovereignty (itself an increasingly suspect concept on the left)?

“I think it’s time a state (other than California?) stood up to ICE and made this case and let them know that people have rights,” the governor crooned. He accused the federals of “stoking terror among law-abiding residents.”

Of course the people Cuomo is conferring rights on are not American citizens of New York, many of whom don’t fancy picking up the tab for the care and feeding of a significant fraction of the Southern Hemisphere. No, those with the rights are those from elsewhere who’ve fetched up here uninvited. And what exactly he means by “law abiding residents” who are here illegally is anyone’s guess.

The Times suggests that Cuomo’s latest spasm has something to do with a looming primary challenge from actress Cynthia Nixon who is occupying the tiny sliver of political landscape to the left of Cuomo and making a lot of noise. The two are engaged in a more-open-borders-than-thou competition. Perhaps one of these two will attempt to lead that infamous caravan from the south straight to Manhattan, Queens, the Bronx, Brooklyn, Staten Island, and Albany. (I wouldn’t recommend they expand this to certain upstate precincts. They might get some blowback.)

Cuomo of course denied that his nullification edict has anything to do with New York politics (apparently forgetting for the moment that it’s a sin to tell a lie). No, Cuomo claims that he’s responding to “lawlessness.” Not the lawlessness of citizens of other countries here illegally, but the lawlessness of immigration officials attempting to return these folks to their own countries.

Red-blooded Americanos in fly-over country should not be concerned if none of this makes any sense to them. It’s not meant to. It’s a New York thing. Even a New York City thing. The further one gets out of the five boroughs of Gotham, the more daft it appears. It can’t be explained, only described.

Cuomo did not immediately return my phone call inquiring as to how many Mexicans, Colombians, Salvadorans, and Nicaraguans he plans to put up at the governor’s mansion in Albany. I guess he’s busy trying to stamp out all that lawlessness. A governor’s work is never done.”

Florida School Stats Surging: In April, the U.S. Department of Education released the latest results of the National Assessment of Education Progress (NAEP), which told us how fourth- and eighth-grade students are faring nationally, in every state, and in most big cities in math and reading. Florida made more progress than any other state in the nation in 2017, as the only state that showed improvement in all four NAEP assessments. Source, Georgia Public Policy Foundation.

Deregulation Savings: Nearly two dozen “deregulations” by Scott Pruitt, head of the Environmental Protection Agency, have yielded $1 billion in cost savings after just one year. Still to come, the Clean Power Plan and Clean Water Rule are just two of the 44 additional deregulations currently on the agency’s docket. It’s estimated that the elimination of the Clean Power Plan could single-handedly save the economy upwards of $33 billion. The EPA also aims to improve science and transparency in developing regulations Pruitt announced recently. “The era of secret science at EPA is coming to an end,” Pruitt said. “The ability to test, authenticate, and reproduce scientific findings is vital for the integrity of the rule-making process.” Source: Environmental Protection Agency via Georgia Public Policy Foundation.

Buyer Beware: The city of Atlanta launched its rooftop Solar Atlanta Program last week, the Atlanta Business Chronicle reported. The pie-in-the-sky goal is to “convert all municipal operations to 100 percent clean energy by 2025.” An article in Forbes notes that between 2009 and 2017, the price of solar panels per watt declined by 75 percent; for wind turbines, it declined by 50 percent. Yet electricity prices increased dramatically in places that deployed significant quantities of renewable energy. “If solar panels and wind turbines became so much cheaper, why did the price of electricity rise instead of decline?” asks author Michael Shellenberger.

Ms. DiBella is the port director of the Fernandina Ocean Highway and Port Authority and the executive director of the Nassau County Economic Development Board. She succeeds Jimmie Mayo and is appointed for a term beginning March 22, 2018 and ending May 31, 2019.

The appointment is subject to confirmation by the Florida Senate.

Drinking, Dining & Dancing at Shrimp Festival: The 2018 Riverfront Stage overlooking the downtown Marina, will feature live music Friday, May 4 through Sunday May 6 with the local Indie group Flipturn kicking things off at 7:30 p.m. Tomorrow, Saturday, May 5, the music begins at 9:30 a.m. with the Fernandina Beach High School Jazz Ensemble and the Honey Badgers at 11 a.m. with  Sean McCarthy and his band at 1:00 p.m. At 4:30 that afternoon what festival organizers bill as “The Greatest Hits on Earth” will feature John Elefante, former head singer of Kansas; Randall Hall, formerly of Lynard Skynard; and Jimmy Hall of Wet Willie and formerly with the Jeff Beck Group. On Sunday the day starts with Back From the Brink, a bluegrass group at 11 a.m. followed by local swing band and jazz drummer Les DeMerle and his vocalist wife Bonnie Eisele at noon. The Swinging Medallions round out the day at 3 p.m. Sean McCarthy will also perform at Down Under  at 6.p.m. Saturday followed by a performance at PJD’s Beer & Wine Garden’s “I survived Shrimp Festival” party starting at 6 p.m. Monday, May 7. The annual Kentucky Derby takes place tomorrow, Saturday, May 5,  with post time at 6:30 p.m. and I will be at the Florida House Mermaid Bar for the 14th year enabling folks who are interested to select a horse at random for a $10 contribution and spend two minutes staring at the TV to cheer their pick around the track. Get there at least an hour ahead of time if you want to pick a horse. Speaking of cheering , PJD’s Beer & Wine Garden celebrated its 1st year anniversary this past Wednesday evening with a jam-packed crowd that enjoyed raffles for hats, T-shirts, and a free buffet. The cozy 12 South 2nd Street Cheers-like pub has earned a reputation as a friendly, fun place for regulars and visitors to hang out and enjoy more than 100 different beers, interesting conversation, and local musicians thanks to efforts put forth by owners Pajamadave Voorhees and his fiance Zan Maddox.

Looking forward to the details of the boat trip to nowhere.

We need more issues of The News Wrecker; how do we support it?

As a recent transplant from Amelia Island to Dunwoody Ga. I would never consider this place as a vacation destination unless you just got out of prison and are desperate for somewhere to go. You may ask why in hell did you move from paradise to a suburb of Atlanta. GRAND KIDS plus we have owned this home since 2005.Dunwoody is a nice place to live and convenient to most any place in Atlanta.

As a transplant from Metro Atlanta, I chuckled at the Dunwoody reference. It is a nice place to live and raise a family, but certainly not a vacation spot.
Can’t believe you really actually referred to Laura DiBella as “Gal” , sounds like a Grandpa from the old West.