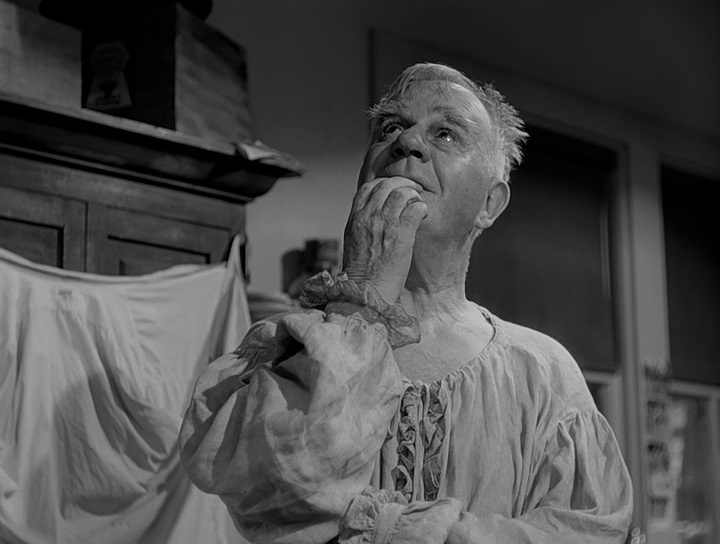 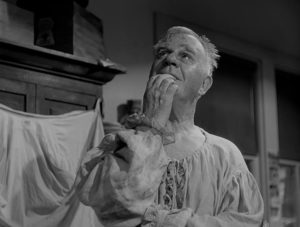 I don’t know much about banks or how they work.

In the old days before automatic deposits, when I received a Friday paycheck from the newspaper where I was a reporter I’d rush to the bank and deposit it, hopeful that I could get there ahead of the check I wrote the day before.

Once deposited the money sat over the weekend unavailable to me unless I once again could find someone foolish enough to accept one of my checks. Credit cards? Forget it. I didn’t have a credit card until I was in my early 30s, so if I didn’t have any cash on me after depositing my paycheck it was a long dry weekend. 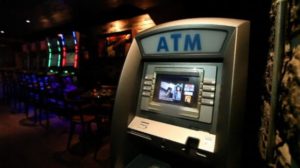 Things are different today. Now money flows from banks through Automatic Teller Machines (ATMs) that are scattered all over the world in such essential locations as  bars, casinos, strip clubs, and Big Louie’s Payday Loan and Tattoo Parlor. The ones at your bank’s drive-throughs that don’t charge fees are fake, with permanent “Temporarily Out of Service” notices flashing on them. Once you put your card in one of those at 5 p.m. on Friday it refuses to return it just as you look up and see the teller hang the “closed” sign on the bank’s front door.

Nowadays the credit card companies are hooked up somehow to the banks’ ATMs and they all want you to put more money in the bank so you can pay their credit card bills and the bank’s fees for letting you use their machines so you can charge more beer, and pay more ATM fees to get your money.

But I’m not bashing banks any more, as my issue has been solved. The rest of you are on your own, unless you know my new friend, Keith Leibfried, over at First Federal Bank.

Last week I fretted about how upset I was when I was told by First Federal Bank, that recently purchased my current bank, CBC, that my wife and I would lose the use of our vintage pin-only debit cards. I took my angst out on First Federal CEO and President Keith Leibfried comparing him to the arch-villain banker, Henry F. Potter, in the 1947 film classic “It’s a Wonderful Life.”

I picked on the wrong guy. Not because Mr. Leibfried’s  a financial bully and threatened me. Nope, just the opposite. As it turned out Mr. Leibfried came through like Clarence Odbody, the  guardian angel who came to George Bailey’s rescue in that same film.

Mr. Leibfried rang my bell when he called me last Friday evening telling me there was no reason to leap off Shave Bridge because my wife and I will be able to continue to use our museum-ready pin-only debit cards at his bank. He expressed disappointment that his letter in the brochure explaining the financial benefits current CBC customers could expect because of First Federal’s acquisition wasn’t clear enough. 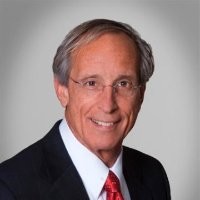 Not only did Mr. Leibfried call me on a Friday well past 5 p.m., but he also volunteered that he’s a baseball fan partial to the Chicago Cubs. He couldn’t have been more congenial, gracious, and friendly, making me feel guilty that I may have jumped the gun when I compared him to the curmudgeonly Mr. Potter.  He even followed up with an email, assuring me once again that on August 24 — the day CBC transitions to First Federal — that Linda and I will have access to the same pin-only ATM cards we’ve happily used the past eight or more years. In fact the branch manager of our 14th Street bank, also emailed me reiterating her boss’s commitment. It was like the phone company saying: “No you don’t have to have one of those fancy new-fangled cell phones. You can still use the rotary-dial  one if you want to.”  I won’t go into detail again why I want a pin-only card. I did that last week. Look it up.

Mr. Leibfried didn’t address my suggestion of opening sports bars in his bank lobbies boasting scantily-clad waitresses and I didn’t push my luck by pursuing it. But I’m sticking with Mr. Leibfried and his bank anyway, and hope he doesn’t realize too quickly that Warren Buffett spills more money in his couch cushions that I’ll ever have to deposit in his bank.

I’d like to invite Mr. Leibfried out for a couple of beers, my treat, but first I have to stop by an ATM.

Things I Didn’t Know: The Eisenhower Interstate Highway System requires that one mile in every five must be straight. These straight sections are usable as airstrips in times of war or other emergencies. 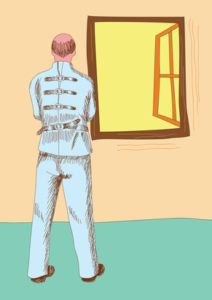 The World Gone Mad: Deranged left-wing language monitors have created gender-neutral pronouns “xyr” and “xth” and “ze” — not even words — so not to offend anyone who might be offended. In the meantime, the brain-dead intellectuals at Stone Age Headquarters at the University of Minnesota have gone a step further, saying that students and faculty there can be expelled or fired if they refer to someone by the wrong pronoun. These loons now have a policy that allows university members to choose their own personal pronouns including: “he,” “she,” “they,” and “ze” and say they will expel or fire those failing to go along with this lunacy. But how do we know who’s who or who’s what in their convoluted world. If a person is sporting a three-day growth of beard, a crew cut, chugging beer, swearing like a sailor, and singing “Rocky Raccoon” in a baritone voice, I’m taking a stab in the frozen Minnesota darkness that it’s probably a guy. If there’s another in a halter-top with miles of cleavage, long silky hair, lipstick and wearing high heels, I’ll render a wild guess it’s a gal. But I’m a novice at this stuff.  I don’t know what the hell a “ze,” “eyr,” or a “xth” looks like. Will the Golden Gophers academic fruitcakes provide books like the ones about birds that enable us to identify all of them and their habitats?

Things I Wish I’d Said: “They say the universe is expanding. That should help with the traffic.” — Steven Wright.

Awash In Oil: Thanks to improved technology for tapping shale formations, U.S. oil production has soared. Production could reach 11.8 million barrels a day next year, the U.S. Energy Information Administration predicts. That would make the United States the world’s biggest oil producer, ahead of Saudi Arabia and Russia, for the first time since the mid-1970s. As a result, oil imports could drop as low as 1.6 million barrels a day, which would be the lowest level since 1958. Source: Fortune via Georgia Public Policy Foundation. 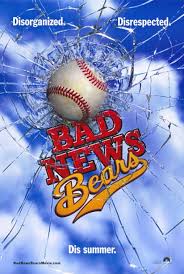 As manager of the motley Pandemonium crew I already feel like Casey Stengel following the 1962 season when Jimmy Breslin penned  a book about that year’s New York Mets team titled “Can’t Anybody Here Play This Game?” The Mets were the worst team in modern day baseball history finishing that season 60 1/2 games out of first place with a 40-120 won-lost record.

The decision to participate in the city’s league wasn’t taken lightly or made hastily, it was debated for several hours over vast quantities of beer. It was either form a softball team or go set off fireworks at Main Beach.

However, as a manager with a clipboard I know that you never tip your hand to the other team, thus keeping the opposition off balance. Not giving away your intensity level is a good strategy. So is keeping lots of cold beer nearby in the parking lot.

Despite what Pandemonium team members think, being their manager isn’t easy. I could be doing important things other men my age are doing such as taking control of a government, merging AT&T with Taco Bell, or shaving my head, getting a tattoo and learning to skateboard. I’ve read that I’m supposed to be thinking and worrying about things such as climate change, plastic straws, chasing feeble-minded sea turtles into the ocean, inflation, trying to figure out how many genders are enrolled at Harvard University, or getting drunk and setting off fireworks at Main Beach. But I’m not. Instead I’m devoting my most productive years to a bunch of insubordinate drunks who think they can play softball but don’t know a bat from an oboe.

We even have an anonymous corporate sponsor, Austin Inc., a local group of highly skilled executives, who will remain nameless. As they were being over-served they over-heard our plans and made a snap decision to buy the team its snazzy jerseys.

But who knows what might happen. I’m putting my reputation on the line here. For example, Mets manager Casey Stengel, who was “retired” by the Yankees after losing the 1960 World Series said he had been fired for turning 70 years old and that “I’ll never make that mistake again.” The Mets hired him, and Stengel reportedly said, “It’s a great honor to be joining the Knickerbockers.” He referred to the Polo Grounds, where they temporarily played, as the “Polar Grounds.” He also had two pitchers on the team — both named Bob Miller — but couldn’t remember their names.

I know very well the Pandemonium will play its games at Ybor Alverez Field, wherever the heck that is. My major concern after finding the place, and once all the parking lot beer is consumed, is finding a port-a-potty.  And will there be fireworks after the games?

Overheard AT PJD’s Beer Garden:  “Those vegetarians bragging that their tofu concoction tastes just like a burger or chicken are so annoying. Why don’t they just go buy a burger or some chicken?”

Dave, if the Golden Island reaches the boiling point – in terms of social unrest or a community uprising to your blog – you can always apply to be allowed back into the Atlanta suburbs. I think you served your time in the sand and sun and are eligible for parole.

Should you tell your players that you were an embarrassment as a player on the IBM Atlanta softball team back in the Seventies? When you blamed your eyesight for your failure at both the bat and in the field, we did the right thing as I recall: we put you on the bench next to the beer cooler.

1. No one in their right mind would ever sing Rocky Racoon in a Baritone voice. That’s just silly…

2. How would the vegetarians know which burger to buy since there are apparently two best burgers on the island?

Glad to hear Keith called you. He’s never called me in the four years or so that I’ve banked there, but then I never slammed him in a public blog. I banked at CBC (formerly First National), for over 15 years and I continue to do so even after I moved some of my banking to First Federal four years ago. I’ve been extremely happy with both banks. I’m glad you’ll be giving First Federal a chance after the merger. I hope you enjoy working with them as much as I have. And hats off to you Dave, for admitting you might have gotten out a little ahead of your skis with that rant. Keith showed a lot of courage in calling you and you showed an equal amount in your mea culpa today. Everybody sounds happy this week! Let’s keep that up….