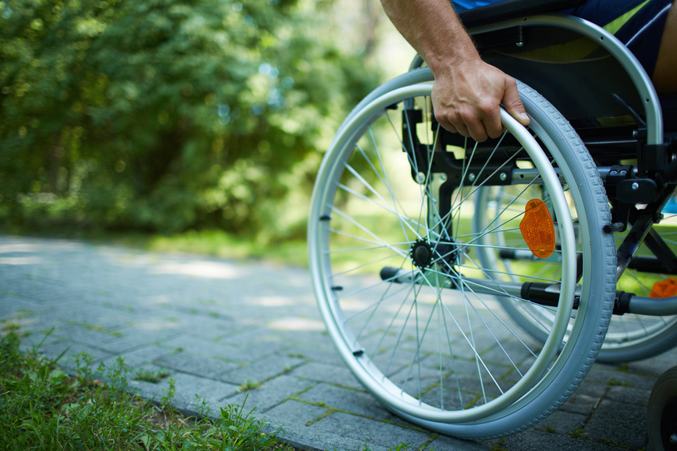 Miller Time: To prove a point our newest city commissioner and Palace Saloon barkeep Johnny Miller took off in a wheelchair the other day to try and maneuver the downtown Front St. area from the corner of Centre St. to the entrance of the Salty Pelican and discovered what those who use wheelchairs regularly already know…it can’t be done.

On a second attempt he did manage to cross to the other side of Front St. and make the short trip, but it put him smack in the middle of the road and precariously close to the train tracks.

OK folks, something really has to be done about this before there is a tragic accident, more law suits and additional groups of disgruntled pedestrian locals and tourists thumbing their noses at all of us.

Oh, and when I brought the topic up in this space a few days ago, a few ladies informed me that it isn’t just folks with wheelchairs, baby buggies, walkers, and canes that can’t navigate the obstacle course to the Pelican, it is women in high heels that find the going impossible as well.

I don’t understand why the folks who operate the Marina Restaurant do not understand that the foot traffic generated by a sidewalk alongside that Front St. eatery would be good for their business too, not just the Pelican.

I do like Mr. Miller’s methods though and soon expect him to prove another point by attempting to maneuver the street in a pair of stiletto heels.

If you’re protesting ID’s don’t forget your ID: In an item posted by friend Benita Dodd of the Georgia Public Foundation (GPPF) I discovered that The North Carolina State Conference of the NAACP in Durham announced February 8 that it will be holding a march to protest voter ID laws in that state. In the middle of a list of “Do’s and Don’ts” sent to invitees and participants by the NAACP  is the following: “To go to the rally, you are asked to have “photo identification (driver’s license, passport or other valid photo id) with you and keep it on your person at all times.”

The folks organizing the voter ID protest might also want to suggest to their followers that In addition to needing an ID to protest voter ID laws, citizens of North Carolina need a valid form of identification to fly commercially, ride Amtrak, enter federal buildings, use credit cards, buy cough syrup, cigarettes, and alcohol, apply for welfare, cash a check, register for school, and apply for a job, among other things. Other than that, no ID required.

Norwegian text message: Dewey Olson, an old friend from my IBM days who once manned that company’s Midwestern PR offices from Minneapolis sent me the following: “Lena, I’m having one more beer with Sven. If I’m not home in one hour, read this message again.”

What the heck is THAT? That’s a question a few blurry eyed folks may soon be asking when they wake up with throbbing hangovers in the morning and look in the mirror at their new tattoo. The Electric Mermaid, a tattoo parlor soon to open on downtown’s North 2nd Street, next door to the Dog Star Tavern and across the street from the Palace Saloon, will be in a location bound to tempt its share of tipsy patrons. Tattoo artists probably have rules against inking folks whose better judgment has been clouded by a happy hour run amok, but their location does conjure up some interesting scenarios.

Read all about it for a buck or two more: Newspapers around the country are decrying declining revenues due to the loss of readers and advertisers, and many are managing that decline by cutting costs and raising prices. Recently two local papers have decided that one way to stem their losses is to increase the cost of their product with the Fernandina Beach News Leader upping the price of its single copy edition in racks and stores from 75 cents to a buck, while the Jacksonville Times-Union doubled the cost of its paper from a buck to two dollars Monday to Saturday and from $2.00 to $3.00 on Sunday and nationally the USA Today doubled its cost from one buck to two. Like other papers these three are struggling with the transition by younger readers from print to digital and the loss of advertising revenue, and are looking for ways to strengthen the bottom line. Times-Union sports columnist Gene Frenette recently told the Amelia Island Men’s Newcomers Club that he disagreed with his paper’s price increase decision but also noted that staff on that paper hasn’t had a salary increase since 2007. I’m a hard core print person and will never sit in bed on a Sunday morning with a cup of coffee reading a newspaper on an electronic gizmo, but I’m like most print loyalists, a member of the older generation, and we’re not the newspaper industry’s target demographic. The Times-Union should have done like the other two and alerted its readers to the jump in price with a brief explanation.

Thought-provoking thoughts: Aren’t liberals always claiming that “diversity” is “strength”? But don’t immigrants who refuse to assimilate undermine “E Pluribus Unum?” In addition liberals are always saying that Social Security is running out of money but I’ve never heard them contemplate that welfare may also be running dry. Former President Jimmy Carter’s grandson, Jason, is running for governor of Georgia on nostalgia for gramps’ presidential years! Talk about a tough sell.

Hey mister, wanna buy a car? An automobile is probably the second most expensive investment people make following the purchase of a house, so should folks in the market for a car heed the advice of primary school age kids when pondering their purchasing decision? Apparently local TV advertising representatives think so as they have convinced owners of car dealerships to feature their kids in ads with pleas that I assume are supposed to convince buyers to drop $30 thousand or more on a new or used ride. Air conditioning and heating companies have picked up on the trend as well, with the tiny tots pleading with viewers to consider dad’s products that also cost several thousand dollars. These ads have the opposite impact on me, as I’m assuming the people that pay for them think I’m so dim that I’d buy a car or an HVAC unit based on the advice of a seven-year-old? Girl Scout cookies or a glass of lemonade sure. A car or AC unit? No.

For Want of a nail…..: Is there a cobbler on Amelia Island or anywhere nearby? There’s a shop on South 8th Street with a sign reading “Milo’s Shoe Repair” but it has been empty for months. Somebody’s going to make a few bucks if they can tuck a shoe repair shop in the corner of an already up-and-running business hereabouts.

Oops: Wendy Schaefer, the talented graphics designer who heads up Blue Frog Design, which did such a wonderful job putting this site together, was doing some routine maintenance on it the other day when she accidently left a gizmo open allowing some electronic goop to seep out and knock on subscribers email doors, however, she assures me the stuff was harmless and the electric blob was soon swept from the blog.

Obamacare – the US Government’s Edsel: The only difference I can see so far between commercial disasters such as the Ford Edsel, Bic Disposable Underwear, smokeless cigarettes, Thirsty Dog bottled water for pets and Obamacare is that American consumers weren’t forced to buy those other commercial catastrophes or pay a fine if they didn’t, and if Barack Obama had marketed those other product disasters under the same terms he pitched Obamacare, he’d probably be facing prosecution for fraud.

Say Defuniak real fast four times: During our drive to Texas in December we exited for lunch in Defuniak Springs, a Florida panhandle town selected because we like to say “Defuniak” and discovered that this tiny municipality boasts more than 200 Victorian era houses and buildings and the state’s oldest library. It’s also home to the Hotel Defuniak, a 12-room inn fully restored to its 1920’s elegance with prices ranging from a ridiculously low $93 to a high $130 (for a suite) per night and a cozy and classy looking linen tablecloth hotel bar and restaurant called Bogey’s. The town also sports a really good barbeque joint in a strip mall just north of the Interstate on state route 331 named simply “BBQ,” located in a cavernous building with a huge stage and posters that advertise live country music on weekends. We’re considering the 310-mile drive back there for a long weekend at the hotel and to eat more brisket, collards and pintos and discover the story behind all those Victorian era buildings in a town with a population of only 5,500. Call the hotel toll free at (877) 333-8642.

Dave, Milo’s Shoe Repair is vacant no more. Milo is back and is here to stay. He is a very nice man and does exceptional work. It will probably take him a while to build his clientele back up, but if you are in the area, stop in and meet him. Better yet, take some of those old shoes that need work with you.

Always enjoyed your column and am glad the News Leader pointed folks to your new blog.